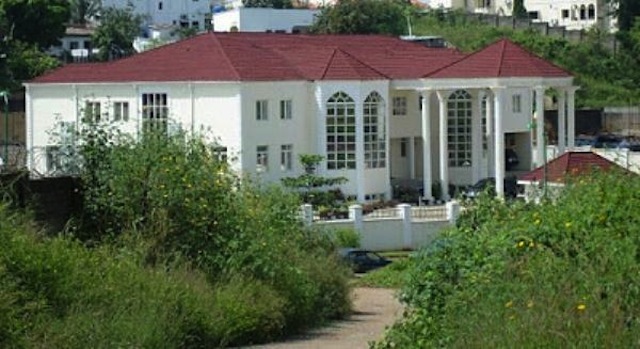 The confiscation hearing of the assets of former Nigerian governor, James Onanefe Ibori continued in London today, with the court shown footage of a palatial property built in Nigeria for him.

The mansion built for the jailed former governor, has marble columns and a private gym, that offered a glimpse into the lifestyle of Nigeria’s ruling class.

The opulent mansion staffed by cooks, maids and chauffeurs was just one of a portfolio of properties across the world worth over $10 million in total that Ibori acquired while governor of oil-producing Delta State from 1999 to 2007, Reuters reported.

Footage of the property at Clement Isong Street in Abuja, taken by Nigeria’s Economic and Financial Crimes Commission (EFCC) when it searched the home this year, revealed a level of luxury unimaginable to most of Nigeria’s 170 million people.

The majority live in ramshackle housing with little or no electricity or running water.

The property also boasted a large private gym with a treadmill, cross-trainer and other fitness equipment. A close-up shot inside one of several marble bathrooms showed a power shower with electronic control panels.

Last year Ibori pleaded guilty at London’s Southwark Crown Court to 10 counts of money-laundering and fraud in one of the biggest embezzlement cases seen in Britain. He is serving a 13-year term at Long Lartin maximum security prison in England.

Shown as part of a confiscation hearing in which prosecutors are seeking court orders for Ibori’s assets to be seized, the film featured a directory of telephone extensions across the property including the “children’s parlor” and “staff house”.

A list of staff and suppliers included multiple chauffeurs, cooks and housekeepers as well as details of how to reach the “TV man”.

Footage of what appeared to be the master bedroom showed an enormous bed with an ornate velvet and silver headboard, facing a large flat-screen television flanked by four high-tech standing speakers.

Outside the house were parked a luxurious Range Rover with TV screens on the back of the leather seats, a red Lexus car and a Toyota pick-up truck. EFCC investigators were filmed searching under mattresses, inside drawers and inside a toilet tank.

They could also be seen looking through papers found in the property including what appeared to be an invoice from French luxury goods maker Louis Vuitton.

That such footage was shown in open court in London will be a humiliation for a man who was once addressed as His Excellency and courted by crowds of people seeking his patronage.

Ibori was not present in court, having declined to attend the confiscation hearing.

In his heyday, Ibori was a power broker at the heart of Nigeria’s ruling party. He is by far the most prominent Nigerian politician to be held accountable for the corruption that blights Africa’s most populous nation and top oil producer.