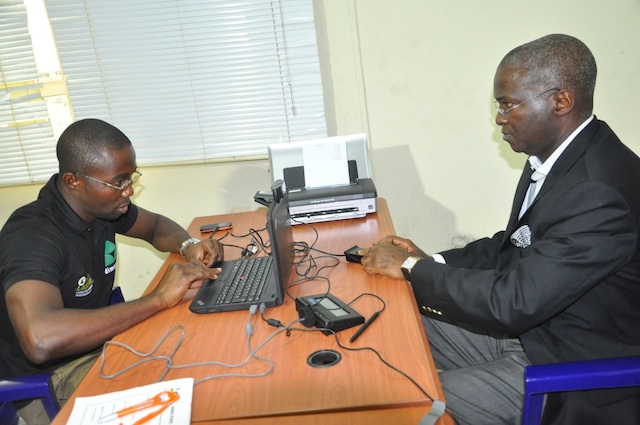 Fashola being registered as a Lagos state resident

Governor of the western Nigerian state of Lagos, Babatunde Raji Fashola has flagged off the statewide registration of residents, estimated at 21 million.

With the flagging off of the exercise and the inauguration of the Lagos State Residents Registration Agency, LASRRA, the data and biometric details of all residents in Lagos State will be taken.

Flagging off the registration on Thursday at the Adeyemi Bero Auditorium, Secretariat, Alausa, in Ikeja, the governor said no nation could survive without the means of planning for the populace, saying that the exercise, government would be able to formulate policies that would cater for the residents of the state.

“Any government that seeks the kind of efficiency that we seek, any Government that understands its primary purpose as we do, that we exist for the people and not otherwise; such a Government will pursue data collection and management as a critical infrastructure.

“This is why today is a watershed day. The day when we formally launch the Lagos Residents Registration Programme that will enable us register and collate the data of all persons who are residents of Lagos. This has nothing to do with indigenes of Lagos State or ethnicity. If you are an indigene of Lagos State and you live in Jos, you are not eligible for this exercise. It is the people living here that we have direct responsibility to,” he stated.

Fashola added that government came up with the idea of registering residents of Lagos because it discovered many gaps as government did not know the actual number of residents it had to plan for, stressing that the residents registration exercise would be use to fill those gaps.

“For instance, we have data on the number of vehicle owners in the state but not all the residents of Lagos own cars. And we also know the number of the pupils in the public schools but not all of them attend school; all these showed that there is a gap required to be filled.

He said every individual must have a means of identification that showed that he or she resided in the state, adding that data collection and gathering had become the pole standard of any community that took planning seriously, stressing that government was determined to achieve result.

The governor emphasized that while the traditional methods might be useful in gathering such information, it was unarguable that accuracy was questionable as speed would become an issue, saying that “as we have seen in our attempt to try to enumerate people entitled to compensation within our State.

“In an information technology driven age, data collection, processing and management has become the gold standard and the most important currency that any community can seek to acquire.

This would also enable the government to serve the people better.”

She said that the agency had put together a mobile team that would move round to register the aged people and the handicaps, as it was compulsory for everybody to participate in the exercise.