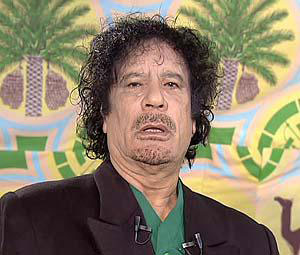 The son and one-time political heir of deposed Libyan leader Muammar Gaddafi appeared in a tribal court on Thursday after the militia holding him defied an order from the state to deliver him to a jail in the capital.

Saif al-Islam has been held in a remote desert outpost since his capture nearly two years ago by fighters who consider him a trophy and a bargaining chip for their tribe’s influence and who are distrustful of a government they say is failing the state.

Responding to the judge’s question of whether he wanted to be tried in Tripoli, Saif al-Islam, who is also wanted by the International Criminal Court (ICC), said he preferred to remain in Zintan, 140 km (90 miles) southwest of the capital.

“Zintan is part of Libya and I don’t have a desire to move to anywhere else,” said a smiling Saif, who was seated in an iron cage, wearing blue overalls and flanked by masked guards.

Zintan fighters caught Saif al-Islam in the southern desert a month after his father was captured and battered to death by a mob. They have become the most powerful fighting force in the capital and hold sway across western Libya.

His trial in Zintan, rather than being for crimes against humanity for which he is wanted in Tripoli and The Hague, is on a lesser charge of giving sensitive information to an ICC lawyer.

In the power struggle between different militia since Gaddafi’s fall, Zintan fighters have aligned themselves to tribes that once formed Gaddafi’s power base, and analysts say this partly explains their benevolent attitude toward Saif al-Islam.

Former prisoners under Gaddafi staged a noisy protest outside a Tripoli court on Thursday, where the head of the once-feared national spy agency, Abdullah al-Senussi, and others appeared for a pre-trial hearing.

“We don’t want money! We want those responsible for beheading people to be tried!” the crowd chanted. They also called for Saif al-Islam’s trial to be moved from Zintan. (Reuters/NAN)