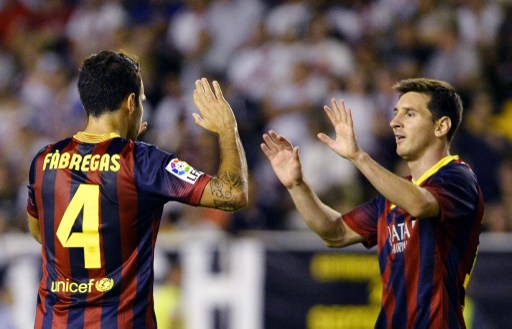 Pedro Rodriguez scored a hat-trick as Barcelona maintained their 100 percent start to the La Liga season with a comfortable 4-0 win over Rayo Vallecano on Saturday.

The Spanish international rewarded the visitors’ bright start when he slotted from after some brilliant play by Lionel Messi on the half hour mark.

However, just as in recent weeks, Barca were thankful to goalkeeper Victor Valdes for keeping them in front as he saved his second penalty in as many games when he palmed away Roberto Trashorras’ effort 10 minutes before half-time.

That was to be the turning point as Pedro added a second barely two minutes into the second-half before sealing his hat-trick 13 minutes from time.

Rayo had conceded 14 goals in their last three games and 12 in their previous two meetings at home to Barca, but they had the first clear chance of the game on three minutes as Johan Mojica’s cross was met by the unmarked Alberto Perea and Valdes was forced into a fine save.

Seconds later Barca ought to have taken the lead as a sensational touch by Lionel Messi took him beyond two Rayo defenders on the edge of the area, but he overran the ball as he rounded goalkeeper Ruben Martinez and Anaitz Arbilla cleared.


Neymar then had a great chance to get his first league goal for Barca as Xavi’s drilled cross came through to the Brazilian at the back post but Martinez got down low to his left to parry.

Messi danced past three Rayo challenges to set up another clear chance for Neymar 11 minutes later, but this time his right-footed effort drifted past the post.

Barca were lucky not to concede the opening goal in bizarre fashion moments later when Martin Montoya overhit his backpass to Valdes and the ball rolled inches past the keeper’s left-hand post.

The visitors did eventually take the lead on 33 minutes thanks to another brilliant piece of play by Messi as he again sucked the Rayo defence in before laying the ball off to Pedro who finished into the far corner.

Rayo were handed a lifeline two minutes later though when Adriano was very harshly punished for a foul on Trashorras, but Valdes continued his sensational form as he parried the midfielder’s weak spot-kick to safety.

The hosts were left to rue that missed opportunity when Pedro slid home from Fabregas’ cross to put the game to bed within two minutes of the second-half.

Messi twice came close to a third and Neymar struck the post as Barca cut through the Rayo defence at will in the second period and it came as no surprise when the third goal did arrive as Neymar unselfishly teed-up Pedro to seal his hat-trick.

Fabregas sealed the rout 11 minutes from time when Barca’s pressing caught Rayo in possession deep inside their own half and Xavi squared for his Spanish international colleague to fire home.