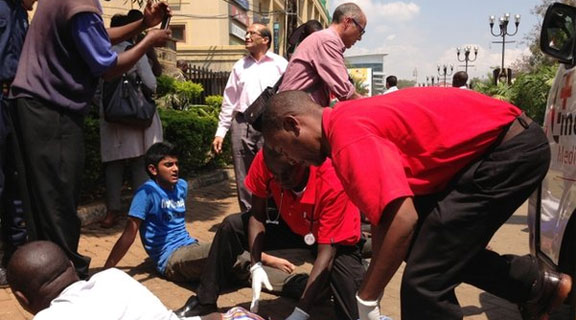 The local Standard newspaper put the death toll at 10.

Several attackers and trapped civilians were believed to still be inside the large four-storey shopping centre more than two hours after the attack began, and heavy fire was heard as police units moved in.

Inspector General of Police David Kimaiyo is at the scene and leading the operation to rescue people holed up at the mall, reported The Standard.

The attackers were also believed to have taken no fewer than seven hostages as the police arrived to flush them out of the mall.

“They have seven hostages, confirmed,” an officer said as police went shop-by-shop to clear the mall and evacuate terrified people caught up in the incident.

An AFPTV reporter said police and security guards were trying to secure a multi-screen cinema complex inside the upmarket Westgate mall.

The reporter said she saw at least 20 people rescued from a toy shop on one of the upper floors of the mall.

A shop manager who managed to escape said at one point “it seemed that the shooters had taken control of all the mall”.

Police and ambulances surrounded the Westgate mall, which is popular with wealthy Kenyans and expatriates and would have been packed with families on a sunny weekend day.

Terrified people — black, white and Indian — could be seen running away from the compound clutching children while others crawled along walls to avoid stray bullets.

Kenneth Kerich, who was shopping when the attack happened, described scenes of panic.

“I suddenly heard gunshots and saw everyone running around so we lied down. I saw two people who were lying down and bleeding, I think they were hit by bullets,” he said.

“Initially we thought it is police fighting thugs. But we could not leave until when officers walked in, shot in the air and told us to get out.”

The motive of the attack was not immediately clear, but Kenyan media said the attackers, who witnesses said were black-clad and masked, may have been either armed robbers or “terrorists”.

An AFP television journalist saw three bodies laid out in front of the mall, their heads covered, and two more bodies inside.

An eyewitness who survived the assault by gunmen said he saw the body of a child being wheeled out of the mall.

“The gunmen tried to fire at my head but missed. At least 50 people were shot. There are definitely many casualties,” a mall employee, Sudjar Singh, told AFP.

Vehicles riddled with bullet holes were left abandoned in front of the mall as police instructed residents of the Westlands neighbourhood to stay away from the scene.

“There’s an incident at Westgate and we’re urging the public to keep off the area,” Inspector General of Police David Kimaiyo said.

“Our officers are on the ground carrying out an evacuation of those inside as they search for the attackers who are said to be inside,” he said.

“We have managed to evacuate some people to safety. We urge Kenyans to avoid the area as we pursue the thugs,” Kenya’s Interior Ministry said on Twitter.

Local television reports, quoting witnesses trapped inside the mall, said a number of people had been taken hostage while others were hiding inside shops.

The Westgate mall, which opened in 2007, has restaurants, cafes, banks, a large supermarket and a cinema that attract thousands of people every day and have made it a Nairobi landmark.

It is popular with the large expatriate community living in the residential neighbourhoods around it, including with foreign staff from the United Nations, which has its third largest global centre nearby.

Security agencies have regularly included the Westgate shopping centre on lists of sites they feared could be targeted by Al Qaeda-linked groups.

The Somali insurgents from the Shebab group, which claims allegiance to Al-Qaeda, have repeatedly threatened to strike at the heart of Kenya in retaliation for Nairobi’s military involvement alongside the government they are trying to overthrow.