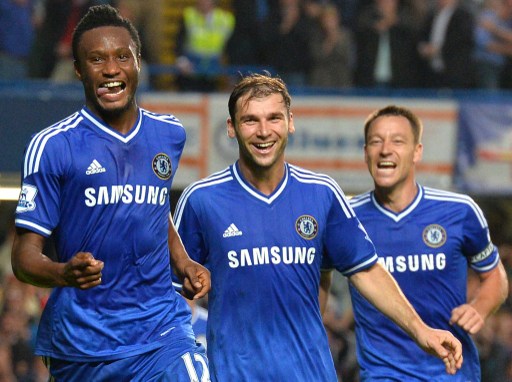 Chelsea ended a run of four winless games to beat Fulham 2-0 and move to the top of the Premier League on Saturday, after Southampton stunned previous leaders Liverpool.

Chelsea manager Jose Mourinho created a stir by dropping Juan Mata from his squad for the visit of west London rivals Fulham and saw his side struggle to create chances in the first half at Stamford Bridge.

Indeed, the away side procured the best opportunity of the opening 45 minutes, only for Darren Bent to shoot straight at Petr Cech when sent clear by Pajtim Kasami.

It was Chelsea who made the breakthrough, however, with Oscar scrambling home from close range in the 52nd minute after Fulham goalkeeper David Stockdale parried from Andre Schurrle and Samuel Eto’o.

John Mikel Obi made it 2-0 in the 84th minute, converting a John Terry knock-down from close range to end his 185-game wait for a first league goal.


After consecutive losses to Everton and Basel, it was a timely victory for the Europa League champions, who lead the standings on goal difference from Liverpool, albeit having played a game more than several of the teams below them.

Having drawn 2-2 at Swansea City on Monday, Liverpool saw their early-season momentum fade yet further in a surprise 1-0 loss at home to Southampton.

Daniel Sturridge then had a penalty appeal turned down after tangling with Dejan Lovren, and it was Lovren who broke the deadlock in the 53rd minute with a back-post header from a left-wing corner.

Only a fine triple save from Simon Mignolet prevented Southampton from adding to their lead, but Lovren’s goal proved enough to inflict a first league defeat on Liverpool since a 3-1 loss to the same side last March.

“We are bitterly disappointed and it was one of them days,” said Liverpool manager Brendan Rodgers, whose side visit Manchester United in the League Cup on Wednesday.

“We were not so good with the ball and, technically, nowhere near the level we have been at. The players have been excellent for these last few months and today was an off day.”

Everton moved to within a point of top spot after Romelu Lukaku scored on his debut to snatch a 3-2 win at West Ham United and help preserve the last unbeaten record in the division.

West Ham twice took the lead, via a deflected shot from Ravel Morrison and a Mark Noble penalty, only for Leighton Baines to level on each occasion with a pair of sensational free-kicks from 25 yards.

Noble was then sent off for a rash foul on Ross Barkley before Lukaku bravely headed home an 85th-minute winner in his first game since signing on loan from Chelsea.

Another on-loan striker, Loic Remy, scored twice on his first home start for Newcastle United, but still finished on the losing side in a 3-2 defeat by Hull City.

The Frenchman twice put Newcastle ahead, but Hull hit back through goals from Robbie Brady and Ahmed Elmohamady before Sone Aluko settled matters with a sumptuous left-foot volley in the 76th minute.

Stephane Sessegnon came back to haunt his former club Sunderland by opening the scoring in a 3-0 win on his debut for new side West Bromwich Albion.

Goals from Liam Ridgewell and Morgan Amalfitano completed victory to leave Sunderland rooted to the foot of the table, and visiting manager Paolo Di Canio’s misery was compounded when striker Steven Fletcher went off with a suspected dislocated shoulder.

Earlier, new Aston Villa signing Libor Kozak scored two minutes after coming on for injured team-mate Christian Benteke to give his side a 1-0 win at Norwich City.

Villa manager Paul Lambert played down Benteke’s injury, saying: “The medical staff reckon it’s his hip flexor. Hopefully it’s not too bad. But Libor Kozak came on and scored within 90 seconds, which shows he’ll endear himself to the crowd.”