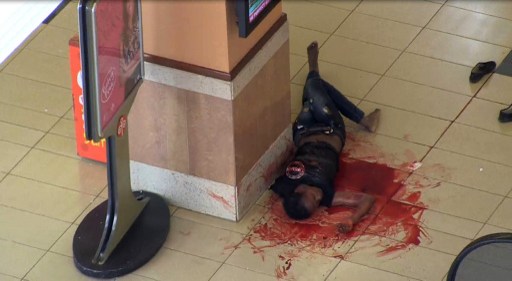 Somalia’s Al-Qaeda-linked Shebab rebels on Saturday claimed resposibility for the attack on Westgate Mall in Nairobi, saying on Twitter it was in retaliation for Kenya’s military intervention in Somalia.

“The Mujahideen entered #Westgate Mall today at around noon and are still inside the mall, fighting the #Kenyan Kuffar inside their own turf,” the group said on Twitter.

Masked attackers stormed a packed upmarket shopping mall in Nairobi on Saturday morning, spraying gunfire and killing 30 people and wounding dozens more before holing themselves up in the complex.

The gunmen were “pinned down” after hours of painstaking evacuations, with police going shop to shop to secure the Westgate shopping mall, a security source told AFP.

“The attackers have been isolated and are pinned down in an area on one of the floors. The rest of the mall seems to be secure,” a security source told AFP at the scene.

Senior police sources said they believed a well-organised “terror gang” numbering around 10 was behind the assault on the shopping centre, which was packed with around 1,000 shoppers when it was besieged at midday.

An eyewitness told AFP that he heard the gunmen speaking Arabic or Somali and saw the group executing shoppers, in what appeared to be the worst attack in Nairobi since an Al-Qaeda bombing at the US embassy killed more than 200 in 1998.

“The death toll is now standing at 30. This includes those who have died at the scene and at the hospital,” a senior police official told reporters. The Red Cross confirmed the figure and said another 60 had been wounded in the attack.

Police at the scene said a suspect wounded in the firefight had been detained and taken to hospital under armed guard.
Shocked people — black, white and Indian — could be seen running away from the Westgate centre clutching children while others crawled along walls to avoid stray bullets.

Kenneth Kerich, who was shopping when the attack happened, described scenes of panic.

“I suddenly heard gunshots and saw everyone running around so we lied down. I saw two people who were lying down and bleeding, I think they were hit by bullets,” he said.

“Initially we thought it is police fighting thugs. But we could not leave until when officers walked in, shot in the air and told us to get out.”

An eyewitness who survived the assault by gunmen said he saw the body of a child being wheeled out of the mall.

“The gunmen tried to fire at my head but missed. At least 50 people were shot. There are definitely many casualties,” mall employee Sudjar Singh told AFP.

Vehicles riddled with bullet holes were left abandoned in front of the mall as the Red Cross appealed for blood donations and police instructed residents of the Westlands neighbourhood to stay away.

The four-storey mall, which has several Israeli-owned businesses, is a hub for Nairobi-based Westerners and one of the foremost symbols of Kenya’s affluent classes. It has long been considered a potential terror target. It opened in 2007 and has restaurants, cafes, banks, a large supermarket and a cinema.

It is popular with the large expatriate community living in the residential neighbourhoods around it, including with foreign staff from the United Nations, which has its third largest global centre nearby.

Security agencies have regularly included the Westgate shopping centre on lists of sites they feared could be targeted by Al Qaeda-linked groups.

The Somali insurgents from the Shebab group have repeatedly threatened to strike at the heart of Kenya in retaliation for Nairobi’s military involvement alongside the government they are trying to overthrow.

UN Secretary-General Ban Ki-moon is following the attack “closely and with alarm”, a statement from his office said.

British Foreign Secretary William Hague said on Twitter that his country was “in close touch with Kenyan authorities about the attack in Nairobi. Our urgent priority is the welfare of UK nationals.”