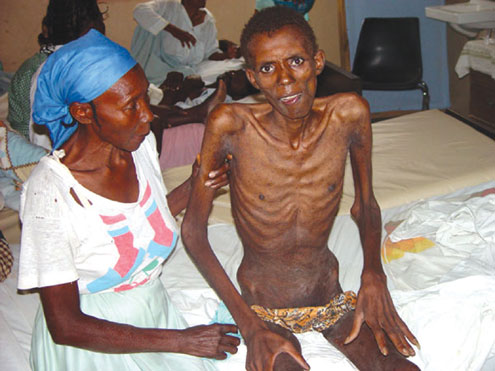 A person living with HIV/AIDS:Money to help him stolen by Nigerian officials

New HIV infections have plummeted by a third overall since 2001 and more than halved among children, the United Nations said Monday.

Hailing progress in distributing antiretroviral drugs that prevent the transmission of the virus from pregnant women to their unborn children, the UN body said it may be possible to slash new infections among kids by 90 percent in the next two years.

In its annual report on the state of the global pandemic, the agency said the drugs had prevented more than 670,000 children contracting the human immunodeficiency virus (HIV) which causes AIDS from 2009 to 2012 alone.

In sub-Saharan Africa — home to 90 percent of the world’s 3.3 million infected youngsters — the decline was particularly striking.

In Ghana, for instance, 90 percent of pregnant, HIV-positive women had access to antiretroviral treatment last year, up from just 32 percent three years earlier.

As a result, the likelihood of women in the country infecting their unborn children dropped from 31 percent in 2009 to just nine percent last year, said UNAIDS.

Increased access to the drug “cocktail” which curtails HIV transmission but does not cure it, has helped reduce the number of AIDS-related deaths among all age groups by 30 percent since they peaked in 2005, the report said.

In a foreword to the 269-page report, Sidibe hailed “continued progress towards the global vision of zero new HIV infections, zero discrimination and zero AIDS-related deaths.”

The report showed that 9.7 million people in low- and middle-income countries, the bulk of those infected, had access to HIV drugs last year, compared to only 1.3 million seven years earlier.

While the hike is impressive, it falls short of a UN target announced two years ago to reach 15 million people by 2015.

And it represents only 34 percent of the 28.3 million people who need the drugs, under new guidelines released by the World Health Organisation in June.

The increased access to treatment also means that more people are living with HIV, according to UNAIDS.

Some 35.3 million people were living with the virus last year — about 70 percent of them in sub-Saharan Africa — up from 30 million in 2001.

Sidibe insisted the 2015 target for global access to antiretrovirals remained in sight, but stressed the world must “have the vision and commitment to ensure no one is left behind”.

Obviously, this will put a strain on world purse strings.

UNAIDS said international donor contributions to combating HIV had remained flat since the global financial crisis erupted in 2008, and individual countries were increasingly picking up the tab to beat HIV at home.

Last year, nations accounted for 53 percent of the $18.9 billion (14 billion euros) set aside to fight the virus.

Earlier this year, Sidibe insisted the investment would pay off, pointing out that “fewer deaths, less sickness” takes a burden off the healthcare system, allowing HIV-positive people to work and contribute to the economy for longer.

“If we do not pay now, we will pay later, we’ll pay forever,” he said.