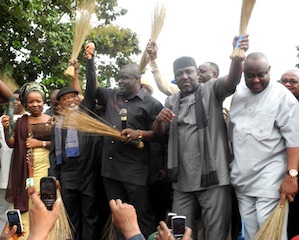 The All Progressives Congress (APC) on Tuesday inaugurated a 25-man campaign committee to ensure victory for its governorship candidate, Senator Chris Ngige, in the Anambra governorship election.

Members of the committee include the Publicity Secretary of the party, Alhaji Lai Mohammed, the National Women Leader, Mrs Sharon Ikpeazu and the National Organising Secretary, Sen. Osita Izunaso.

Others are the Deputy National Youth Leader, Mr Uzoma Igbonwa, the South-East Vice-Chairman of the party, Dr Anyim Nyerere and Mr George Muoghalu.

Inaugurating the committee in Awka, Gov. Rochas Okorocha of Imo, said that the governorship contest was “between Ngige and others in Abuja”.

Okorocha, who called on the people of the state to make monetary donations towards the campaign project as a covenant, assured that Ngige would deliver on his mandate.

“I am here for one reason; that Anambra has been in confusion for too long. The people of the state are tired of being controlled from Abuja,” Okorocha said.

The governor described Ngige as a “trustworthy” individual who would use the resources of the state for its development.

“He has assured me that he will make education free and change the state for good.

“Within two years, he brought development to the state. Imagine what would have happened if he had remained as governor for eight years.”

Okorocha, who promised to relocate to Anambra during the campaign, said that the governorship campaign would officially kick-off on 3 October.

In a remark, Lai Mohammed said that Ngige was a candidate to beat at the elections, describing the donation towards the campaign as worthy of emulation.

“What happened today only happened in the first republic during the Action Group where farmers and artisans contributed to the election of candidates.

“Okorocha has reminded us of our glorious past. What it means is that we are signing a contract with the people.

“What has happened today is what our politicians have not been able to explain to the people that if a big man sponsors your election, it is like the devil putting you in office.

“If the ordinary people donate and put you in office, it is like signing a covenant with them.

“I am moved by the spirit of collectivism.”

In his speech, Ngige commended party faithful for making donations towards his campaign, saying such had never happened since he joined politics in 1998.

“I have never seen where people came for inauguration and drop money. It is a covenant that you have all made with me of which I will fulfill.

“We are in this journey together; we shall swim and float together till we get to government house.”

He also urged them to guard their votes at the polling units.

Ngige said that the state campaign committee would be inaugurated on 25 September.

Also commenting, Ikpeazu called on women to turn out en mass to vote for the party.

“APC will be about sustaining women development and not just about coming out for campaigns,’ she said.

The acting Chairman of the national campaign committee, Chief George Muoghalu, while describing Ngige as “good brand”, assured that the premium placed on the committee would be justified.