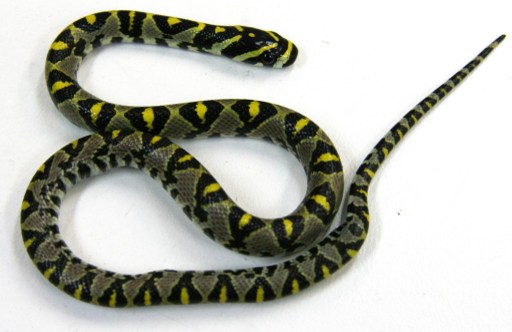 This Australian Government Department of Agriculture handout photo received on September 23, 2013 shows a small snake, identified as a Mandarin rat snake predominantly found in Asia, which forced the grounding of a Tokyo-bound Qantas flight in Sydney on September 22 after being found near the doorway of the plane. A spokesperson from the Department of Agriculture has praised Qantas’s quick actions, with the finding of the snake demonstrating the important collaborative efforts of the department and airport staff in identifying and containing serious biosecurity risks.

Australia’s flagship airline said passengers were given hotel rooms overnight and left Sydney on a replacement plane Monday morning. Qantas said the original jet would be fumigated before returning to service in case there were other snakes on board.

The snake was taken by quarantine officials for analysis.

The Agriculture Department said the snake, a species that grows to an average 1.2 meters (4 feet), had been euthanized, “as exotic reptiles of this kind can harbor pests and diseases not present in Australia.”

The department said the snake had arrived aboard the jet in a flight a day earlier from Singapore.

“The Department of Agriculture is looking into how the snake came to be on the plane, but isn’t able to speculate at this time,” it said in a statement.

The mildly venomous Asian snake was about the width of a pencil and did not pose a threat to humans, but it had the potential to cause ecological havoc in the Australian environment if it had escaped the plane with a mate, Canberra Reptile Zoo herpetologist Peter Child said.

While snakes rarely pose aviation hazards, a 3-meter (10-foot) python in January clung to the wing of a Qantas flight from the northeast coast city of Cairns to Papua New Guinea. The python died during the flight but was still attached to the wing when the two-hour flight ended in the national capital Port Moresby.