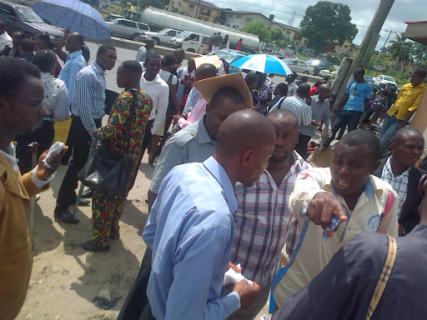 Thirteen thousand newly recruited teachers by the Rivers State Government were this morning in Port Harcourt, the Rivers State capital dispersed by the Police at the Liberation Stadium as they gathered to collect their appointment letters.

The Permanent Secretary in the Ministry of Education, Dr. Richard Ofuru, said the Ministry was compelled by the heavy presence of the Police to ask the teachers to go home to avoid stampede and confrontation with the Police.

When Ofuru was asked whether he informed the Police Command that 13,000 teachers would be gathering at the stadium he said; “I am surprised that we have to take Police Permit to gather teachers and give them appointment letters because it is a purely administrative process. When we interviewed them we used the Main Bowl of Sharks Stadium behind the Rivers State Police Command because of the crowd. We did not inform the Police and there was no incident.

“It is like saying we must invite the Police each time we have an inter-House Sport Competition. It is purely a school affair. There have been radio and Television announcements inviting the newly recruited teachers to come out and collect their letters. The Police PPRO should have informed us so that we do not allow 13,000 teachers to travel from all parts of the state only to be dispersed.”

He however gave the assurance that the disruption by the Police would not deter the Ministry from issuing the employment letters to the 13,000 employed teachers who are supposed to resume teaching in the new schools built by the Governor Amaechi’s administration.

The new image-maker of the Rivers State Police Command, Ahmad Mohammad, a Deputy Superintendent of Police,DSP, who resumed yesterday after Angela Agabe was removed declined to comment on the reason for dispersing the teachers.

He said he will address the press later.

However, Kelechi Wogu,one of the five anti-Governor Chibuike Amaechi lawmakers on behalf of the others issued a press statement that the Rivers State government was gathering people at the stadium to protest against President Goodluck Jonathan.

It was that same petition, P.M.NEWS learnt that was sent to the Police Command to stop the exercise.

In his swift reaction on a live radio news bulletin in Port Harcourt, Tony Okocha, Governor Chibuike Amaechi’s Chief of Staff, condemned the action of the Police.

He said the action has gone to confirm the alarm the government has been raising that Rivers is under siege by the Police headed by Mbu Joseph Mbu, the Commissioner of Police whose only mission is to ground the activities of Government in the state.

“You can imagine the Police shooting tear gas canisters on teachers who are mostly women falling over themselves and their only crime is that they have been unemployed and the state Government decided to give them job after passing through rigorous competitive examination and retreats. Police cannot imagine why they should be employed.”

Some of the teachers expressed anger and disaapointment over the action of the Police.

“I am terribly disappointed that the Rivers Police Command can deny us from collecting our letters of employment.I have been a graduate for over Six years and unemployed but succeeded the tough written and oral screening, went through the one month orientation only to be humiliated by the Police whose excuse we learnt is that we have been gathered to protest against President Jonathan. This is ridiculous. What do they take us to be, Political thugs?”, said Gladys, one of the new teachers,

Another prospective teacher who gave his name as Bright Johnson condemned the action of the Police. He said he came from Bonny Local Government Area yesterday.He had to sleep in the house of a relation to meet the appointmet at the stadium today. “Those who think by this action, they are fighting Amaechi have misfired, because we cannot see President Jonathan to give us jobs.And the one we have gotten is being frustrated because of the politics we don’t understand.”

Last week, the Police stopped an attempt by the Rivers State Government to take youths under the auspices of Rotary International on a guided tour of new Health Centres executed the the state Government.

About two weeks ago, on the orders of Mbu, Governor Amaechi and about 70 former Speakers of 36 State houses of Assembly were prevented from having access to Government House through another gate.