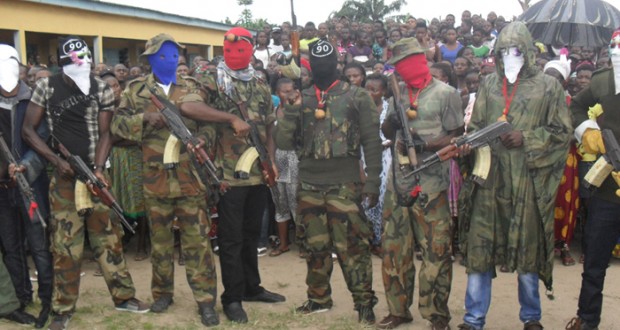 Governor Emmanuel Uduaghan of the southern Nigerian state of Delta on Thursday enjoined the residents of Kokori community in Ethiope-East Local Government Area to stay indoors from 6 p.m. to 6 a.m. until further notice.

The governor, who gave the directive at a news briefing at the Government House Annex in Warri, said that the measure became imperative so as to safeguard the people’s lives and property.

He, however, said that the measure should not be misconstrued as a curfew, adding that he gave the order because of ongoing security operations in the area.

He said that the security operations were already yielding positive results.

He urged oil companies operating in the local government area to go about their normal business, assuring them of adequate security.


Uduaghan said that the arrest of the kidnap kingpin, Kelvin Oniarha, in the area had brought a great relief to the state.

He, however, noted that Oniarha had the full support of his kinsmen and a chief priest identified as Michael Omonigho.

Uduaghan said that Omonigho was already in the custody of the soldiers for interrogation.

He described as shameful, the dancing of Kokori residents around Oniarha and his boys recently when they came out and gave the Federal Government a 60-day ultimatum to grant amnesty to them.

The governor vowed that the state government would no longer treat kidnap cases with levity.

“It is shameful that mothers, who are supposed to be celebrating the graduation of their children from higher institutions, were dancing around criminals,’’ he said.

Uduaghan, nonetheless, debunked the speculations that no fewer than 13 persons had been killed and 11 injured in the military operation, saying that only one life was lost.

He said that the troops deployed to community carried out the operation, equipped with sound intelligence reports.

Representatives of the Nigerian Army; the Nigerian Navy, the Nigeria Police and the State Security Service (SSS) attended the governor’s briefing.