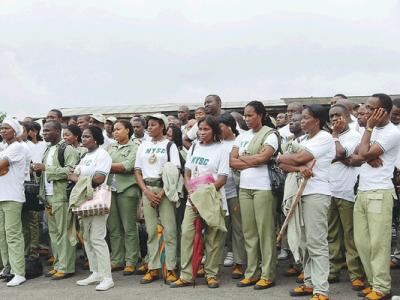 Nemesis has caught up with eight fake members of the National Youth Service Corps, NYSC, after they were arrested, charged to court  and ordered to be remanded in prison custody.

Chief Magistrate Ramatu Gulma of the Wuse Zone 2 Magistrates’ Court on Thursday also directed the Defence Counsel, Mrs Ijeoma Utchay, to apply formally for the bail of the accused, and adjourned the case till 25 November for hearing.

The chief magistrate also ordered for a one-week hearing on the case, starting from 25 November, to ease the transportation of the accused as they do not reside within the FCT.

The Prosecutor, Mr Moses Idakwo, of the State Security Service (SSS), objected to the bail application.

He said that the first accused, Azuma, had, on 21 January, presented herself to Patrick Orem, a mobilisation officer at the National Youth Service Corps (NYSC), Maitama, for mobilisation.

Idakwo said Azuma claimed to be a graduate of Manonmamian Sundaranar University, India.

He also said that the second accused, Okoro, had superimposed an Indian visa bearing her name on an old Nigerian international passport, which had a United Kingdom visa belonging to Dada Ajoke.

Idakwo said Okoro also had, as part of her credentials, a fake degree certificate and transcript from the said university and a fake National Examination Council (NECO) result.

The prosecutor said the officer raised doubts on the credentials and reported to the SSS for investigations.

He said it was discovered during investigation that Azuma paid N70,000, which was part payment of an agreed N150,000 to the third accused, Eze, for the said credentials.

Idakwo said that Eze and  Ikechukwu Izuchukwu, who is currently at large, conspired to prepare the documents.

Investigations into the matter further revealed that Eze had furnished about 30 persons, most of them now at large, with  same credentials for NYSC mobilisation.

He said that Eze, who served in Kaduna State in 2007, also presented fake certificate of the said university.