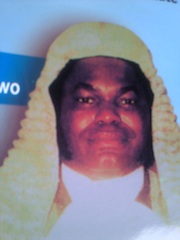 It was a solemn moment at the Lagos State House of Assembly, western Nigeria on Friday as the members held a special valedictory session for the first ever Speaker of the House, Oladosu Olumuyiwa Oshinowo, who passed on 13 August, 2013 at age 72.

Ushered into the Assembly chamber in a brown coloured casket and accompanied by family members, friends and well wishers, the late former Speaker was eulogised by most of the members of the House at the session that was presided over by Speaker Adeyemi Ikuforiji.

Ikuforiji called the late Oshinowo a “lion and trailblazer of the first Assembly” as a result of his contributions to the development of the state.

Oshinowo served as the Speaker of the House between 1979 and 1983 after he won a seat to represent Ikorodu Urban 2 Constituency. Ikuforiji described this period as unique as the late former Speaker served with former Governor Lateef Jakande credited with a lot of successes in the state.

“He was a legislative pioneer; a sagaciously intelligent lawmaker; a man who staked his claim even when democracy was not our culture, the youngest and first speaker ever produced by this Assembly.

“He was one of the greatest legislators of all time; a servant-leader, a great man who stood for the tenets of democracy, champion of the constituents, soul of the legislature,” Ikuforiji said, adding that the late Oshinowo was “clear-sighted, discerning, sociable, respectable, articulate, honourable and trustworthy. It is almost impossible to sum up his life in a few words.”

He recalled how the late Oshinowo had always supported the activities of the House while he was alive.

“Chief Oshinowo’s indelible name will forever be written in this legislature’s hall of fame. His accomplishments are enduring and will continue to exemplify the best in legislative practice.

“He was the interpreter of the collective opinions of the lawmakers who served with him and was the powerful intellectual behind the success achieved at that time.

“For those of us left to mourn him, when the grief seems unbearable, remember today and tell yourself: when he died, I wept and when he laid in state at the Lagos State House of Assembly, I was there.

“His accomplishments are enduring and will continue to exemplify the best in legislative practice,” Ikuforiji said while urging for the celebration of the late Speaker’s achievements.

Most of the members who spoke further extolled the late Speaker’s virtues and stressed that he would be missed by the House.

In a condolence message to the family, Clerk of the House, Ganiu Abiru, described the late Oshinowo as “a parliamentarian whose vast knowledge in legislative practice and procedure contributed tremendously to the development of democracy and the overall objectives of then Unity Party of Nigeria, UPN, which resulted in the huge success recorded during the administration of the first civilian governor, Alhaji Lateef Jakande.”

He prayed for strength for the family of the deceased.

A condolence letter signed by the state Head of Service, Adesegun Ogunlewe, stated that during Oshinowo’s tenure as Speaker, the House came up with motions which culminated into laws that made the administration of Alhaji Jakande very successful.

“His legislative acumen was unparalleled as attested to by the stabilisation and sustainability of the Assembly in the second Republic in Lagos State.”

The letter said the state government shared in the collective grief that followed Oshinowo’s demise.

Dressed in black cloloured lace fabric, wife of the deceased, Abosede Segilola, described him as one who pampered his family.

“I met my husband in the summer of 1968, and we got married in December 1969 after over a year of sizzling love affair.

“Oladosu was the most gentle man I have ever seen or met; well spoken, gentle and very tender, will never raise his voice at anyone and particularly at his family,” she said calling him every woman’s man.

She said they had six children, but lost one.

Relating an experience she once had with her husband as Speaker, she said: “I used to wonder what they were doing till little hours of the morning. And due to my curiosity, he one day proposed that I come to the House one evening and we would go home together.

“He simply wanted to show me what they were doing till late everytime. Believe me, still at after 12 midnight, some members of the House, with their Speaker, were still at the House meeting, consulting as if it was 12 noon. I decided to leave him alone since then.”

The corpse was later conveyed in a wine-coloured motorcade by pal bearers to Ikorodu where the corpse is to be interred.