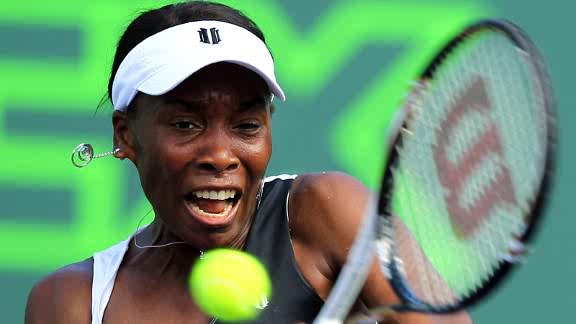 Venus Williams resurgence on court has been halted by Czech star, Petra Kvitova in the WTA Pan Pacific Open in Tokyo.

Venus had shown glimpses of her old self en-route the semi-final spot, knocking out world number 2, ailing Victoria Azarenka in the second round in two straight sets.

She defeated 13th seed, Romania’s Simona Halep in three sets in the third round.

Venus also edged out her teenage Canadian opponent, Eugene Bouchard in the quarter finals, also in three sets, before succumbing to hard-fighting Kvitova, in a three setter.

In another development, Venus has been denied a new record for the world’s fastest serve Friday after tennis chiefs said a bullet delivery clocked at 209 kilometres (129.9 miles) per hour was not measured by the right equipment.

However, the IDS radar guns the WTA uses to track official service speeds are not deployed in Tokyo, meaning Williams’s own women’s record of 207.6 kph — registered at the 2007 US Open and on her way to winning Wimbledon in 2008 — still stands as the fastest of all time.

The seven-time Grand Slam singles champion, whose ranking has slumped to 63rd in the world after two years of illness and injury problems, admitted she could not believe her eyes when she saw the figure 209 kph flash up on the court-side speedometer.

“I saw that but I was like: ‘Is that real?’ So I don’t know if that’s real,” Williams told the WTA. “I know I’ve been serving a lot harder this tournament than since I’ve come back from my back injury. I couldn’t really serve that hard at the US Open (earlier this month) and this summer.

“It feels good but I don’t know if it was that hard. I hope it was — that’s insane, it’s awesome.”

Measuring the speed of serves is a notoriously inexact science as the equipment used at tournaments where the IDS equipment is not in place has proved less than reliable.

Williams, who won the latest of her 44 career singles titles at last October’s Luxembourg Open after being diagnosed with autoimmune disorder Sjogren’s Syndrome in 2011, has hit a purple patch in Japan, showing glimpses of the form that won her five Wimbledon titles between 2000 and 2008.

“As a professional athlete you have a window. My window’s still open and I’m going to take advantage of it. I’m not giving it up that easily.”

Williams has again ruled out any chance of retirement in Tokyo this week.

“It’s about staying healthy and staying in the moment,” she said. “There’s no roadmap. I can’t go out there with fear. I know my luck’s going to change some time. I love it. Anyway (sister) Serena wouldn’t let me retire.”

The fastest men’s serve ever recorded in a professional tournament was a 263kph missile fired by Australian Sam Groth in South Korea last year.