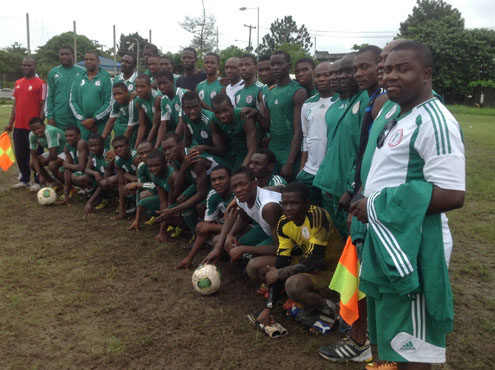 Golden Eaglets in group photograph with Referee Edibi in Calabar

Ahead of their departure to their pre-2013 World Cup camp in Dubai, the Golden Eaglets have been tutored by FIFA referee Peter Edibi about the intricacies of the rule of the game.

The two-day session which centres on Hot Topics of FIFA 2010 including delicate issues of offside positioning and infringements, started with tutorials at their Princeville Hotel Camp on Thursday and was later followed with practical during the team’s training session on Friday at the U.J Esuene Sports Stadium.

“First and foremost, referees are human beings and you should see them as your friends,” said Edibi, an international referee since 2007, who offered the service free-of-charge.

“You should know that these referees have been trained to apply the rule to the letter without fair or favour.”

He advised the players to be disciplined in order to endear themselves to officials on the pitch, adding that referees at the World Cup level would not compromise standards.

“Discipline attracts players to referees and like in all human endeavours; discipline should be your watchword. So, put up your best sporting behaviour on and off the pitch,” he said.

Thereafter, Edibi  highlighted to the players through power-point presentation on how  they can avoid some of the errors and poor conduct noted in the FIFA’s instructive video particularly tactical fouls bothering on ‘careless and reckless’ tackles.’

He also enjoined the players not to be quick tempered because ‘you must control your emotions’ in order not to incur the wrath of the referees who are trained to fish out and punish anyone that infringe on the laws of the game.

Meanwhile, the players were highly impressed, promising to put forward their best behaviours on and off the pitch at the World Cup.

“We want to thank our coaching crew and especially Referee Edibi for organising this programme for us because it has opened our eyes to many things we usually take for granted,” said Success Isaac, Golden Eaglets’ vice-captain who was 2013 African Youth Championship, AYC U-17 top scorer.

“Now, we know how we can take advantage of the rules of the game in order to do well at the World Cup.”

It would be recalled that Edibi is one of the unseen hands that helped the Super Eagles emerge African champions last February in South Africa as he provided them with instructive guides after every match. He has promised to avail the Golden Eaglets such opportunity in their