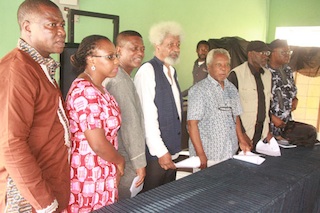 Awoonor, 78, was killed and his son was wounded in the Westgate mall in Nairobi by the Al-Qaeda-linked Shebab on September 21. He was in Kenya for a literary festival at the time of his death.

“We denounce these enemies of humanity,” Soyinka said, accompanied by several writers and authors at a press conference in Freedom Park in central Lagos, Nigeria’s largest city.


Soyinka, who became Africa’s first winner of the Nobel prize for literature in 1986, called for renewed efforts to end such violence.

“It is not the first time that Nairobi has been assaulted,” he said, recalling previous deadly attacks in the Kenyan capital by those he called “cowards who turned their guns on unarmed people.”

Other writers read poems in honour of Awoonor and said his death was a major blow to African literature.

John Pepper Clark, a Nigerian poet, recalled Awoonor’s contributions to diplomacy and politics in his home country, adding that his legacy would live on.

Awoonor was a renowned writer, most notably for his poetry inspired by the oral tradition of his Ewe people.

He was also Ghana’s representative to the United Nations from 1990 to 1994 as well as president of the Council of State, an advisory body to the president, a post he left earlier this year.