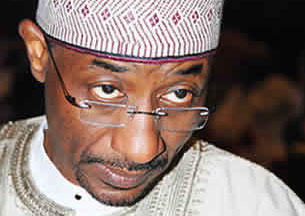 Nigeria’s central bank has announced new measures to tackle money laundering it says is weakening the naira currency and risks pushing up inflation, and which it suspects is linked to early political campaigning for 2015 elections.

“Available statistics indicate that Nigeria has become the largest importer of U.S. dollars,” the regulator said in Friday’s notice explaining that its twice-weekly wholesale foreign exchange auction will be replaced with a retail version requiring dealers to reveal the identity of their buyers.

Corruption in the build-up to Nigeria’s 2015 election is partly responsible for the increase, Governor Lamido Sanusi said at the central bank’s Monetary Policy Committee meeting on Tuesday, adding that it is “absolutely wrong” for bureaux de changes to buy hundreds of millions of dollars without accountability.

“We have seen evidence of huge demand for dollars by bureaux de changes, huge purchases of cash that are not accounted for and that signals money laundering and we’ve got to deal with it,” Sanusi told Reuters by telephone.

“It is a small class of people that has access to huge rents, and that rent has been dollarised,” he said, adding that the bank had been monitoring portfolio outflows and imports and found that neither could explain the surge in dollar demand.

Politicians in Africa’s top oil exporter often spend heavily on patronage to secure seats or pay off rivals, with at least some of this money acquired through corruption or links to crimes such as oil theft or kidnapping. Transparency International ranks Nigeria 139th out of 174 countries on its corruption perception index.

The central bank’s new measures do not affect the $250,000 weekly limit for foreign exchange dealers’ sales to bureaux de changes.

However, dealers will now have to obtain prior approval to import foreign exchange banknotes, and recipients of proceeds from international money transfer firms such as Western Union and MoneyGram will be paid only in naira.

The limit on MasterCard and Visa naira debit and credit card spending abroad has been increased to $150,000 a year, from $40,000 a year, in an effort to increase transparency and reduce black market forex trading.
.REUTERS/NAN