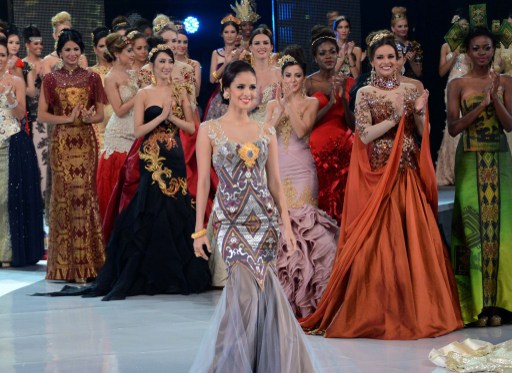 NUSA DUA, Indonesia (AFP) – Hundreds of Islamic hardliners in Indonesia held a mass prayer session Saturday to express their opposition to Miss World, just before the final of the pageant began on Bali after weeks of protests.

Heavily armed police, some with sniffer dogs, and water cannons were protecting the final venue, as the 129 contestants prepared for the end of the three-week pageant on the resort island, to be broadcast around the world.

Thousands of Islamic radicals have taken to the streets in recent weeks across Indonesia denouncing Miss World as a “whore contest” and “pornography”, and foreign embassies have warned the pageant could be attacked.

Despite an early pledge by organisers to axe the famed bikini round for this year’s contest, hardliners were not appeased and the protest movement snowballed.

The demonstrations prompted the government to order the entire pageant be moved from the main island of Java to Hindu-majority Bali, where it opened on September 8 and where there is little radical influence.

As the contestants geared up to fight it out for the Miss World crown, hundreds of members of hardline group the Islamic Defenders’ Front (FPI) gathered at a mosque in Sentul, just outside the capital Jakarta.

Organisers had originally planned the final in a 10,000-seat venue in Sentul before being forced to move to a 2,000-seat centre in Nusa Dua, southern Bali.

The FPI members took part in a mass prayer session to express their opposition, and were addressed by a speaker who lashed out at the pageant, which radicals state goes against Islamic teaching, said FPI member Ustad Maman.

“Indonesia has already shown how it feels about Miss World — we rejected it here, we reject it anywhere,” he told AFP.

Ita Puspita Lena, local police spokesman, said that 200 police were on duty in the area and there were dozens at the mosque for security.

Maman said that 5,000 FPI members showed up for the prayer session, although police put the figure at 1,000.

However, by early Saturday evening there was no repeat of the major protests that have erupted across the world’s most populous Muslim-majority country in recent weeks.

FPI members in East Java had pledged to try and cross the narrow stretch of water that separates the province from Bali to protest there — but they did not manage to get past the tight security.

“There is a lot of security and it’s been hard to get in,” said Maman.

It was the second time that FPI members have failed to cross to Bali from East Java. Earlier this month, they were stopped at the island’s main port by a line of female police backed by hundreds of elite officers.

Almost 700 police are deployed across Bali to provide security for Miss World, backed by traditional Balinese security personnel wearing sarongs and armed with daggers, according to police.

Adding to security concerns, the American, British and Australian embassies have said the pageant could be targeted by extremists, a chilling warning on an island where bombings in 2002 killed more than 200 people.

However, Nana Putra, executive director of the event’s broadcaster and organiser MNC, told AFP that there had so far been no security concerns.

“We hope there’s no problems and I’m sure we’ll get all the support we need,” she added.

Saturday’s final will last several hours and will see the contestants parade in Indonesian-designed dresses. It will also feature a series of musical performances, including one by British boyband Blue.

The finalists will face a question-and-answer round from a panel of judges before the current Miss World, China’s Yu Wenxia, hands her crown to the new winner.