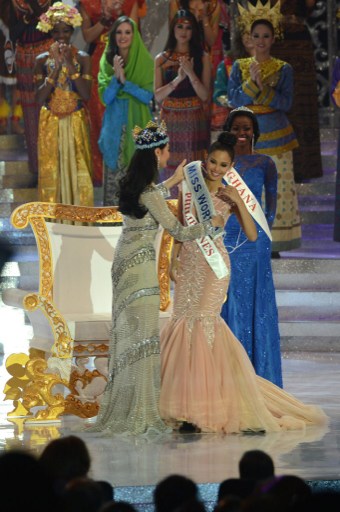 Some 127 contestants took to the stage Saturday for the final and they were quickly whittled down to six. France came in second and Ghana was third.

As hundreds of Muslim hardliners held a prayer session in a mosque near the capital to express their anger at the contest, Megan Young wept as she won the coveted title in the final on Hindu-majority Bali.

The 23-year-old, wearing a pearl white gown, promised to be “the best Miss World ever” in front of a cheering crowd in a venue guarded by heavily armed police and water cannons.

Young, who is studying digital media and also presents TV shows in the Philippines, pledged to “just be myself in everything I do, to share what I know and to educate people”.

Organisers will breath a sigh of relief that the finale of the three-week pageant passed off smoothly after thousands of hardliners protested across Indonesia in recent weeks, denouncing the beauty pageant as a “whore contest”.

Some embassies had also alerted their nationals on Bali to the possibility extremists might attack the pageant, a chilling warning on an island where bomb attacks in 2002 killed around 200 people, mostly foreign tourists.

The demonstrations prompted the government to order the entire pageant be moved from the main island of Java to Bali, where it opened on September 8 and there is little radical influence.

Prominent hardline group the Islamic Defenders’ Front (FPI) had pledged to stage fresh protests on Saturday — but, in the end, no demonstrations materialised.

However, hundreds of members from the FPI and other hardline groups gathered for a prayer session in Sentul, just outside the capital Jakarta, to express their opposition to the pageant.

Organisers had originally planned the final in a 10,000-seat venue in Sentul before being forced to move to a 2,000-seat centre in Nusa Dua.

Those at the prayer gathering were addressed by a Muslim preacher who lashed out at the pageant, which radicals claim goes against Islamic teaching, said FPI member Ustad Maman.

“Indonesia has already shown how it feels about Miss World — we rejected it here, we reject it anywhere,” he told AFP

Ita Puspita Lena, local police spokeswoman, said that 200 police were on duty in the area and there were dozens at the mosque.

Maman said that 5,000 FPI members showed up for the prayer session, although police put the figure at 1,000.

FPI members in East Java had pledged to try and cross the narrow stretch of water that separates the province from Bali to protest there — but Maman admitted they had been put off by the tight security.

Almost 700 police were deployed across Bali to provide security for Miss World, backed by traditional Balinese security personnel wearing sarongs and armed with daggers, according to police.

Before the beauty queens took to the stage for Saturday’s final, the audience were treated to a performance by British boy band Blue.

In the weeks leading up to the final, the contestants took part in a series of “challenge” events for which they were awarded points.

These include a “beach fashion” round, which this year saw contestants swap the pageant’s famed bikinis for sarongs in a bid to avoid causing offence in Muslim-majority Indonesia.

The finalists also faced a question-and-answer round from a panel of judges.

A total of 129 contestants had been due to compete in the final but two pulled out at the last minute, according to organisers.