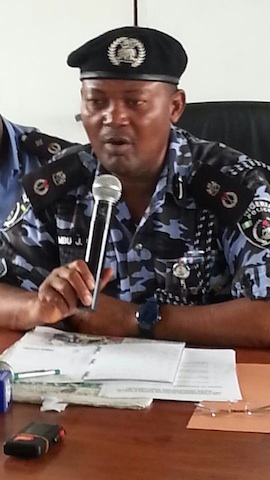 The Nigerian police in Rivers State has moved to stop the inauguration of a Pro-Governor Chibuike Rotimi Amaechi group, RIVLEAF in Bonny.

About 100 policemen invaded the Industrial Centre, and later the local council on Bonny Island to stop the group’s inauguration.

The crackdown came barely 24 hours after the two organized Labour unions Rivers State issued a 21 day ultimatum to the Inspector General of Police,IGP, to redeploy Mbu Joseph Mbu, the Commissioner of Police, over various abuses.

According to eyewitness account, the launching of RIVLEAF was initially scheduled for Bonny Industrial Centre. But when the organisers saw the intimidating police presnce, they shifted the ceremony to the secretariat of the Bonny Local Council. But the police also followed them there and halted proceedings.

Edward Pepple, the Chairman of the Council confirmed the incident to a local radio in Port Harcourt.

He said that when the Police stormed the venue, a senior Police officer leading the team claimed that the Police had the information that some people bearing arms were gathered there.

Pepple also alleged that one of his Personal Assistants was briefly arrested. Not deterred by the antics of the Police, the inauguration was moved to a private individual’s house along Hospital Road on the island. The police also went there as well to stop it.

Calls were put across to Alex Weli, President of RIVLEAF to comment on the incident but he did not pick his calls.

Observers of events in Rivers State said the police crackdown on public assembly appears to have exceptions. For instance, the programmes by the Grassroot Democratic Initiative, GDI, which is the Political structure of Mr.Nyesom Wike,the acting Minister for Education, are never disrupted by the police.

Wike had been using the guise of inaugurating Ward executives across the state to kick off campaign for President Goodluck Jonathan ahead of 2015.

On Wednesday 25 September, about 13,000 teachers employed by the Rivers state Government who were directed to assemble at the Liberation Stadium to collect their letters of posting were dispersed by the Police who called them “touts and miscreants”, who were hired to protest against President Jonathan.