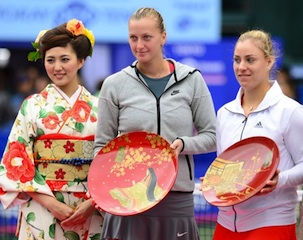 Czech Petra Kvitova recovered from a second-set meltdown to beat fellow left-hander Angelique Kerber 6-2, 0-6, 6-3 and capture the Pan Pacific Open on Saturday for her second title of the year.

Seventh seed Kvitova, the 2011 Wimbledon champion, burst from the blocks in the Tokyo final, storming through the first set, but inexplicably suffered the dreaded 0-6 ‘bagel’ in the second.

She quickly rediscovered her poise in the decider, screaming in delight and pumping her fist as she put away a sharp volley to take a 4-0 lead.

The 23-year-old put fifth seed Kerber out of her misery on her fourth match point, a blistering crosscourt forehand ending the German’s resistance after an hour and 39 minutes and giving Kvitova an 11th career singles title.


“I really want to qualify for the end of season championships but I want to enjoy this feeling first,” said Kvitova, projected to rise from 11th to seventh in the new world rankings and closing in on sixth place in the race for next month’s WTA Championships in Istanbul.

“I felt a bit tired,” added Kvitova after her tour-high 32nd three-set match of 2013. “Angie came back at me but I tried to stay focused and it’s amazing to win such a big tournament.”

It was Kvitova’s first title since Dubai in February and winning the premier five event earned her $426,000. Kerber, who had been seeking a third title and first of the year, took home $213,000.

“It’s tough to answer why I play so many three-set matches,” Kvitova told AFP after levelling her head-to-head record with Kerber to 2-2. “I’ve still not figured out why. I played two and a half hours yesterday (in beating Venus Williams) but that’s not the reason. My game is still up and down but I keep fighting until the last point.”

Kvitova voiced confidence she could push on and win another grand slam title in 2014.

“After winning Wimbledon I know what it takes,” she said. “It’s an unbelievable feeling and I really want to experience it once more.

“I have a new fitness coach (Marek Vseticek) and my condition has felt good this week,” she said. “It’s a good sign for me. I have more confidence on court.”

Kerber, who paid dearly for making only 48 percent of her first serves in the final set, was gracious in defeat.

“After the second set I tried to play the same tennis but she was too good at the end,” said the 25-year-old. “She played aggressively. All credit to her.”