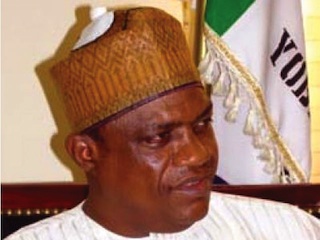 It was an emotional scene as the Governor of Nigeria’s north eastern state of Yobe visited the capital’s specialist hospital where the injured from another Boko Haram mindless attack were recuperating.

Governor Ibrahim Gaidam could just not hold emotions back: he burst into tears.

He saw the critically injured; five students, three of whom have fractures, one has a abdominal injury and another a bullet wound.

What really burst Gaidam’s dam of emotions was the chilling sight of 40 corpses—all students of the School of Agriculture, Gujba, latest victims of the mindless massacre by Boko Haram gunmen.

The Medical Director, Damaturu Specialist Hospital, Dr Garba Fika, confirmed that 40 students of the college were killed in the attack early Sunday.

The governor, who spoke in tears, urged security operatives to intensify aerial surveillance of the area.

The state deputy governor, Abubakar Aliyu, the Provost of the College Mulima Mato, and other dignitaries also shed tears at the mortuary when they saw the corpses of the students.

The attacks had led to the death of 29 students and three teachers.

As the government makes arrangement for the burial of the slain students, parents were seen in groups discussing the fate of their children in view of the serial attacks on schools in the state

Speaking in an interview with the NAN, a parent who requested anonymity said that he and other parents were scared of sending their children and wards to school.

“We are shocked, saddened and scared of sending our wards back to school with these ugly incidents of attack on schools in Damaturu, Mamudo and now, Gujba,” he said.

Meanwhile, chairman of the Northern Governors Forum, Governor Babangida Aliyu has charged security agencies to do all within their powers to halt the killing of defenceless citizens, and attacks on places of worship and educational facilities especially in the North East, by members of extremist sect, Boko Haram.

Aliyu, said its members were seriously concerned at renewed attacks on innocent people, following Sunday’s killing of 40 students of the College of Agriculture, Gujba, Yobe State, as well as the killing of 15 persons in Zangang community in Kaura Local Government Area of Kaduna State.

“The forum is particularly alarmed that the shooting to dead of 40 students of the College of Education; Gujba, Yobe State followed the same pattern as the killing of 22 students and a teacher at Government Secondary School, Mamudo in the same state last July,” said a statement signed by Mr. Aliyu’s Chief Press Secretary, Danladi Ndayebo.