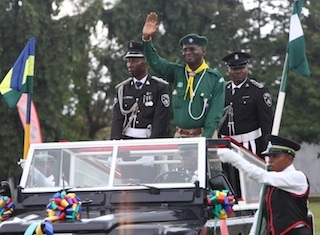 Fashola at Independence parade in Ikeja


As Nigeria marks 53rd independence anniversary, Governor Babatunde Fashola of Lagos State has condemned the plan by the Federal Government to celebrate the Centenary of the amalgamation in 1914 of the disparate ethnic groups by a British colonialist, describing it as a distortion of history.

Fashola, who spoke to newsmen shortly after the Independence parade at the Police College, Ikeja, Lagos, Southwest Nigeria today said the birth of the nation dated back to 1 October, 1960 and not in 1914.

“For me, Nigeria was born as an independent sovereign nation on the first of October 1960. perhaps, she was conceived in 1914, but as we race towards this, it is important not to distort history, I would seek better understanding, better explanation by those who are behind the centenary celebration because if we rolled out the drums three years ago to celebrate 50 years of Nigeria’s nationhood, Independence that we fought for, people went to jail for, what is then this centenary suddenly about because I don’t remember as a child ever coming out at amalgamation day and suddenly, how did we get to 100?

“Did we do 99, did we do 50, did we do 60? So there is something wrong here. I don’t know, but I will like clarifications. A generation is coming behind us, they need to be clear about the history of our country and as I said, maybe conception of Nigeria took place in 1914, but it is the birthday, the date of birth of a child that we celebrate and I think that birthday is October first 1960,” he stated.


Speaking during the parade, the governor appealed for peace across the nation, saying that he believed that the nation was too blessed to resolve its differences with threats of violence and in some cases actual violence.

Fashola added that he believed that compromise was critical and that all reached for it in order to make more meaning out of the situation.

“The circumstances might be different at the moment but I would like to end with words spoken by a great statesman, the late Chief Obafemi Awolowo, in 1967, at another time when our country was at a crossroads: ‘Only a peaceful solution must be found to arrest the present worsening stalemate and restore normalcy.”

“I adopt those evergreen words as my own today and urge all those involved in any form of conflict or disagreement to pursue peaceful solutions,” he stated.

The governor said the nation had gone through its fair share of adversity but that what was important was that through it all, “we are still standing and still standing as one. Despite the various challenges that we are still facing, I remain inspired by the fact that Nigerians continue to repose their faith in this country.”

The governor commended the spirit of resilience that had propelled Nigerians to always forge ahead in the face of all odds, adding that in the past year since this event was last held, the state government had made a lot of progress in the state.

He said his administration had been thinking of and working on implementing multiple solutions that would build Lagos State into the Mega City of our dreams, saying this had culminated in the ongoing residents registration exercise.

Fashola urged Lagosians to participate and register massively as it would enable government prepare adequately for the populace, saying that “I often say that you cannot manage what you cannot measure and that is why we are carrying out this exercise; so that we can better manage our resources, better provide services, infrastructure and solutions; and make better plans and implement better policies that will take care of the needs of the people.”

“I believe that this is important if we are to deal with the problems of the present and build a great future. For example, we cannot solve the problem of inadequate water, insufficient power, overcrowded classrooms, and so on by continuously estimating the size of the need. While estimates are helpful, they must be informed and predicated on reason. This is what makes estimates different from wild guesses.

“We are a 21st Century Government, we are a Government of methods, we are aware of the power of data and we are determined to use reliably collected data to solve day to day problems because the Nigerian dream inspires us,” he stated.