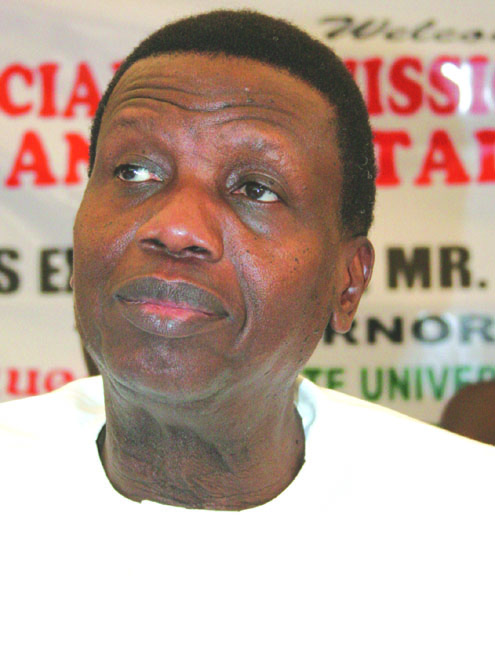 Armed hoodlums, numbering over 40, have invaded Agufoye village, site of the proposed new 3-kilometre auditorium of the Redeemed Christian Church of God, and chased away members of the church who went to start work on the ultra-modern praying ground announced recently by the head of the church, Pastor Enoch Adeboye.

According to sources within the church, trouble started when some people fraudulently obtained a survey plan and invited land grabbers to claim a portion of the land which the Redeemed Christian Church of God had earlier bought for N215 million.

Evidence of the purchase is contained in an Ogun State revenue receipt dated 29 July, 2009 and another N35 million for government’s survey with Ogun State Government receipt No. 0536521 dated 22 July, 2009.

P.M.NEWS gathered that some thugs armed with guns, cutlasses and other weapons stormed the village and started robbing and harassing the residents of the village and agents of the church on the land. Someone was even appointed  to help sell the RCCG land in the village.

In the wake of the invasion and because the RCCG wanted peace, the church still went ahead to renegotiate some portions of the land it had earlier paid for.

Members of the Agufon family of Agufoye village, original owners of the land, have, however, distanced themselves from those trying to prevent the building of the new church auditorium.

Speaking through its spokespersons, Chief Yekini Babatunde Agufon, the Baale of Agufoye land and Chief Amos Oshin Agbabo, head of the family, the family said it did not solicit anybody’s help to tackle the Redeemed Christian Church of God on the land sold to the church years back.

“We sold the land to RCCG in 2002 and 2003 and the family collected money. The money was evenly distributed to the two branches in the family, namely the Otetumo Agbabo and Soole Agufon family. Each family member received at least N360,000 from the proceeds of the sale of the land. We are, however surprised that some people, purportedly acting on behalf of the family, are harassing the church’s agents in Agunfoye Village on the land which have been surrendered to the authorities of the church,” the Baale, Chief  Agufon said.

“These people should not use our land as a battle ground to attack the RCCG or its agents. Whatever the church can do to deal with the trespassers on their land, they should do. We have sold the land to the church and the family has been paid. Anybody claiming to be members of the family that is instigating these land grabbers against the church is not from us. They are acting illegally,” the family said.

The Agufon family has gone ahead to sue other recalcitrant members of the family and their agents at the Sagamu High Court, among other things, seeking the court to stop the forceful entry and occupation of Agufoye village located near Ogijo in Sagamu Local Government Area of Ogun State by the defendants and their agents or privies.

The family is also seeking the order of the court in declaring null and void any sale or resale of land done by the defendants without the knowledge and consent of the family, prior to the institution, and during the pendency of this action.

The family’s claims before the court also include an order of the court removing forthwith the defendants and their agents, privies from the Agufoye village and an order of the court restraining the defendants from entering Agufoye village to attack tenants, assignees, their dependents, relations, properties and other residents of Agufoye or deal adversely in the parcels of land in the village contrary to the interests of the claimants’ family.

Others are Mr. Morufu Muritala and Mr. Adejare Orababa. A date is yet to be fixed for the hearing of the suit.