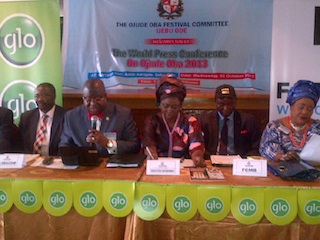 The Awujale and Paramount ruler of Ijebuland, in western Nigeria, has for the umpteenth time canvassed support for the creation of Ijebu State.

He said the state is long over due, saying, he intends to drum up additional support for it to enable Ijebu ethnic group occupy its pride of place in the comity of Nigerian States.

The renewed campaign for the Ijebu state was made today during a World press briefing to herald the 2013 edition of the annual Ojude Oba festival in Ijebu Ode, in Ijebu Ode local government area of the State.

This year’s Ojude Oba festival is to be held on Thursday 17 October,
2013, that is two days after the Eid- el Kabir festival (Great
Beiram), and the theme is: “Actualising the Creation of Ijebu State”.

It will hold at the Oba Adetona Golden Jubilee Centre, opposite the Awujale Palace, Ijebu –Ode.

The monarch who was represented by one of his Chiefs, who is also the
Coordinator of this year’s festival, Chief Fassy Yussuf maintained
that the region has met all the requirements laid down in the
Constitution of the Federal Republic of Nigeria, adding that, “we
humbly advert the attention of the nation to Section 8(1)(a)to(d)
which discuss the criteria of a State creation. It behoves on the
National Assembly and the States of the Nigerian Federation to give
effect to our just and equitable demand. We are making all necessary
contacts to actualize Ijebu State Noin noin (now and then)”.

Awujale lamented that the region has been on the agitation for a
State status in the last 38 years, fuming that instead of creating the
State then, the province was merged with that of Abeokuta to create
what today is known as Ogun State.

“Our demand for an Ijebu State started in 1975 when the Murtala
Muhammed military administration set up the Ayo Irekefe panel on the
creation of new States in the country. We were one of the first groups
in the country that submitted a memoranda.Our memorandum was titled:
The Case for an Ijebu State dated September 9, 1975 and was submitted
under the aegis of the Association for Ijebu Development.

“Regrettably, rather than create Ijebu State, based on the provincial
system in existence during the colonial administration, Ijebu province
was merged with Abeokuta province in February 1976 to form the present
Ogun State, thus, depriving the two provinces the status of having
their individual States. Some of the 22 provinces have now become 2 or
3 States and ever since, we have continued to pursue our quest with
zeal, vigour and determination”, the monarch stated.

It was further revealed that the Speaker of the House of
Representatives, Aminu Waziri Tambuwal will be the Special
Guest of Honour while the governor of Bayelsa State,
Seriake Dickson is the Chief Guest of Honour at this year event.

At last year’s edition, the Senate President, Chief David Mark was
the Special Guest of Honour and the theme then was: Ijebu
State – noin noin.

Representatives of the various Corporate bodies who are partnering
with the organizers for the event also pledged their continuous support for the historical festival, which according to the monarch, “is not only about equestrian display, parade of culture and tradition, merry making and fun fare, it provides the Ijebu nation, the opportunity to take stock, embark on self help projects, reunite with the family members and acquaintances and supplicate to the Almighty God”.

Some of the regular sponsors include Globacom, FCMB, Ogun State
government and Coca-Cola. They have have all promised to inject
innovations to this year’s festival.