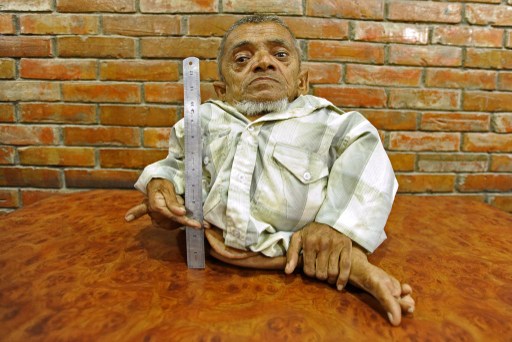 If one thinks the world’s shortest man will be chosen among the dwarfs familiar on the streets of Lagos, you have got to think again.

The man who claims the title, is just about four inches taller than a 12-inch ruler.

He is 73 year old Nepali, that still goes by the title of ‘Master’. He is Master Nau, and his name has been etched in the Guinness World Records’ immovable category.

Here, he poses for a photo next to a ruler in Kathmandu.

Nau, who lives with his younger brother’s family in Bhairahawa, 350 kilometres (217 miles) southwest of Kathmandu, is 16 inches tall while his rival, a Taiwanese man, stands 27 inches.

Officials of Guinness World Records have said the man could qualify for the record, according to Thaneshwar Guragain, who is supporting Nau’s claim and corresponding with the organisation.