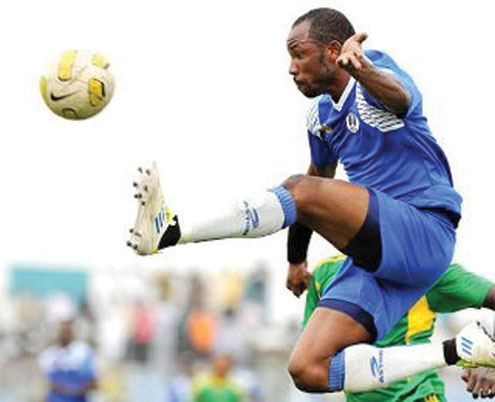 •3SC in action during a recent Nigeria premier leagues match

Shooting Stars are all but mathematically demoted from Nigeria’s top flight after they forced  to a 1-1 draw at home on Wednesday.

The away draw also enhanced Enyimba’s chances of a seventh league crown.

Enyimba now have 59 points, while Shooting Stars slipped to the rock bottom of the table with 43 points.

Enyimba coach Imma Amapakabo told MTNFootball.com that it was a game they deserved to win, but the referee felt otherwise by awarding a questionable penalty to the home team.

“We did very well and deserved to win the game,” he said.

“We threw in everything and that was why we took the lead. We almost got the three points until the referee awarded a penalty which only he could say how it came about. He asked them to replay the penalty after our goalkeeper Femi (Thomas) saved the first attempt.”

Andrew Abalogu opened the scoring for Enyimba in the 56th after Bishop Onyeudo delivered a fantastic cross for him to make hay.

Enyimba goalkeeper Femi Thomas made several saves to keep his team in the game, notably the free kick from Mutiu Adegoke.

Defender Francis Edem equalised for 3SC through a penalty kick by Kingsley Eduwo in the 82nd minute.

Taofeek Adepoju wasted several chances early in the game as Shooting Stars enjoyed early control of the encounter courtesy of the good work of Philip Asuquo and Sola Adeboye in the midfield.

The fans’ anger was provoked by Shooting Stars team manager Ajibade Babalade, who tried to retaliate after he was attacked by the supporters during the game.

The fans have promised to deal with him despite his apologies.