Sons of Agagu, Falae on ill-fated flight, Obasanjo's son not there 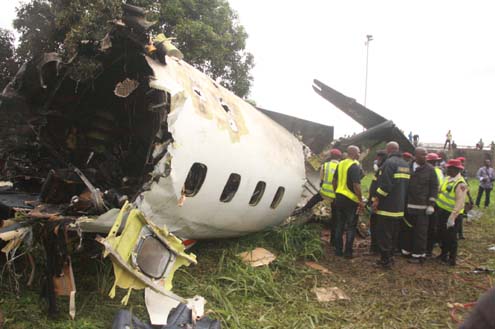 Part of a crashed plane

It has been confirmed that Feyi, the son of late former Governor Olusegun Agagu, and Deji Falae son of former Finance Minister and ex-presidential candidate in 1999, Olu Falae were amongst the twenty people on board the Associated Airline chartered plane that crashed, Thursday, in Lagos.

Feyi Agagu is reported to be amongst the six survivors of the crash.

Speculations that Gbenga Obasanjo, son of Nigeria’s former leader was in the plane, have also been dismissed as unfounded. Reports said ex-president Obasanjo made a telephone conversation with Gbenga in Abuja, to confirm that his son was hale and hearty.

Nigeria’s aviation authorities are yet to release officially the manifest of the plane.

But here is a list published by Sahara Reporters of the twenty passengers on board the ill-fated flight.