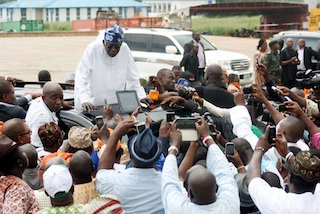 Nigeria’s opposition leader, Asiwaju Bola Ahmed Tinubu, arrived Nigeria on Saturday after a successful knee surgery in the United States, saying he is strong and fit. He also jokingly challenged any journalist to compete with him on a 2.5 kilometre race.

“I’m very fit to do whatever I need to do,” Tinubu told a phalanx of journalists.

“Any of you cannot compete with me on a 2.5 kilometre race now. If you want, let’s start now.”

Tinubu dismissed reports that he was unable to walk bby demonstrating. “This is my leg,” he said, pulling his sokoto up a little to show the leg.

After the briefing, he paid a visit to survivors of the Associated plane crash and comforted them.

Tinubu was received by the his wife, Senator Oluremi, as well as Governors of Ekiti and Osun States, Kayode Fayemi and Rauf Aregbesola.

Also in attendance were Speaker of the Lagos State House of Assembly, Adeyemi Ikuforiji and Senator Ganiu Solomon as well as reps members, Yakubu Balogun, James Faleke and Dr. Adejare.

Lai Mohammed, Henry Ajomale and other political stalwarts were also in attendance.

Pictures from the reception, as recorded by Joseph Oluwasanmi