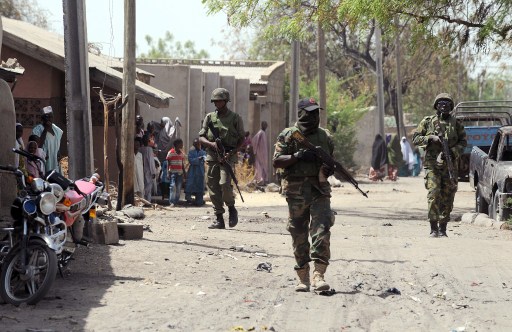 Boko Haram militants are not relenting in their attacks of defenseless civilians in Nigeria’s north east region.

In their latest assault, they killed five muslim worshippers, who had just finished their morning prayers and were heading home.

The dawn attack in Damboa, a town in northeast Nigeria, triggered clashes with troops stationed there, the military said on Sunday.

A spokesman for Nigerian forces in northeastern Borno state, which lies at the heart of a four-year-old Islamist insurgency, told Reuters news service the Islamists crept into the town of Damboa in the early hours of Saturday.

“While they were unleashing their mayhem, troops … engaged the terrorists, killing 15 in the process while others fled,” the military spokesman, Captain Aliyu Danja, said in a statement obtained by Reuters.

The military often gives significantly higher casualty figures for insurgents than for its own men, and it is usually not possible to verify them independently.

Despite a concerted military offensive meant to crush Boko Haram since May, it remains the biggest security threat to Africa’s top energy producer.

Its targets have traditionally been security forces, Christians or Muslim clerics who speak out against it, but its fighters have increasingly turned their sights on civilians in the past few months – massacring hundreds in roadside attacks or assaults on Western-style schools they consider sacrilegious.