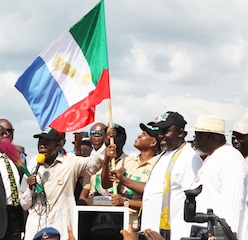 The APC leaders at an event in Delta state

Governor Adams Oshiomhole of the southern Nigerian state of Edo said Saturday’s Delta Central Senatorial election is another test for INEC to show its neutrality and independence in conducting free polls in the country.

At a mega rally of the All Progressives Congress in Warri, Delta State for the APC Candidate in the election, Olorogun O’tega Emerhor, Oshiomhole said “there would be threat, there would be intimidation, there would be blackmail, but what would live for ever is what we should be remembered for. A system thrives only when those who are in it choose to keep quiet. The day you decide to stand on your feet, stop agonizing and start mobilizing, the forces of darkness will give way to the forces of light.

“I believe the Federal Government and the security agencies must maintain the law and order; they must ensure that the votes are protected because the world is watching. This is the first test not only for APC but also for INEC. People want to see whether anything is going to change”, he said

Oshiomhole added: “this senatorial district has shown by action beyond rhetoric your capacity to stand for what you believe in and to refuse to be tempted. This was the only senatorial district that voted for a different candidate different from where other people were going. You did not only vote against them, you voted for the late senator and you defended the votes.

“You have a spirit, a history behind you. You do not need anyone to give you lectures about principle, courage and determination and even the essence of sacrifice. As you leave just go from village to village, remind the people the importance of having a senator of your choice. Urhobo nation could have got much more than they have gotten from Nigeria

Comrade Oshiomhole later presented the flag of the APC to the candidate, Olorogun O’tega Emerhor.