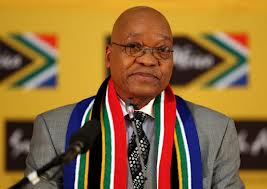 President Jacob Zuma, who has been under sustained attack from young politicians like Julius Malema and Lindiwe Mazibuko, says those who insult leaders in positions of authority would be cursed.

A South African nesportal, iol.co.za. reports that Zuma says this is because God has made a connection between the government and the church.

He was addressing the 33rd Presbyterian Synod in Giyani, Limpopo, on Sunday.

“Whether we like it or not, God has made a connection between the government and the church. That’s why he says you, as a church, should pray for it.”

He likened people who lack “values” by raping children and the aged to animals. “If you don’t have that, (values), then you are not different from animals.”

Zuma urged the church to pray for politicians who insult leaders. Without mentioning names, he said their language was rough and disrespectful.

“Because if you allow them to insult those in authority, you are creating a society that is angry with itself,” said Zuma.

However, the ANC leader said his fellow comrades were also guilty of this “careless” language. “I am not saying the ANC is innocent of the careless language.”

Zuma has repeatedly been insulted personally, lampooned and called names by various people, especially political rivals, since he was accused of corruption and rape in 2005 and 2006.

Although he was later cleared of rape, he is often called derogatory names such as “shower”.

Malema, leader of the Economic Freedom Fighters (EFF), and Mazibuko have led the pack of opposition leaders who question Zuma’s leadership and morality.

Last week, the EFF leader labelled Zuma a “thief” who was not a good role model.

In June, Mazibuko said Zuma had not earned her respect because he built a “palace” for himself in Nkandla, allowed the Guptas’ plane to land at Waterkloof Air Force Base, and failed to honour his promises.