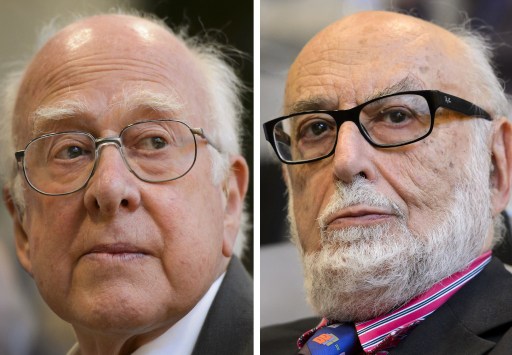 A combo of recent pictures taken on July 4, 2012 at European Organization for Nuclear Research (CERN) offices in Meyrin near Geneva shows British theoretical physicist Peter Higgs (L) and Belgian theoretical physicist Francois Englert who were awarded laureates of the 2013 Nobel Prize in Physics during a press conference on October 8, 2013 at the Nobel Assembly at the Royal Swedish Academy of Sciences in Stockholm.

STOCKHOLM (AFP) – Peter Higgs of Britain and Francois Englert of Belgium won the Nobel Prize for Physics on Tuesday for conceiving of the so-called “God particle” which confers mass.

Higgs, 84, and Englert, 80, were honoured for theorising a particle — discovered last year after an agonising quest — that explains why the Universe has any substance at all.

“This particle originates from an invisible field that fills up all space. Even when the Universe seems empty this field is there,” the jury said in a statement.

“Without it, we would not exist, because it is from contact with the field that particles acquire mass.”

Shortly after the announcement, the University of Edinburgh posted a statement from Higgs saying he was “overwhelmed” by the honour.

“I would also like to congratulate all those who have contributed to the discovery of this new particle and to thank my family, friends and colleagues for their support,” Higgs said.

“I hope this recognition of fundamental science will help raise awareness of the value of blue-sky research.”

Englert told AFP in a brief comment: “I’m very happy to have received the prize.”

Known as a boson, the discovery was popularly dubbed the “God Particle” on the grounds that it is everywhere yet baffingly elusive to find.

Without it, say theorists, we and all the other joined-up atoms in the Universe would not exist.

The presumed particle was discovered last year by Europe’s mega-scale physics lab at CERN, near Geneva, after a decades-long search.

“As an achievement, it ranks alongside the confirmation that the Earth is round or Man’s first steps on the Moon,” Canadian particle physicist Pauline Gagnon told AFP.

Higgs and Englert, at the Free University of Brussels, were honoured for “the theoretical discovery of a mechanism that contributes to our understanding of the origin of mass of subatomic particles,” the jury said in its formal citation.

The duo received the world’s most prestigious award for excellence in physics nearly a half century after they and others set down the theoretical groundwork.

The history of the discovery dates back to 1964, when six physicists, working independently in three groups, published a flurry of papers.

The first were Belgians Robert Brout, who died in 2011, and Englert, who proposed a mechanism by which a mass-giving field of particles invaded the early Universe, which until then was filled only with massless particles.

This was followed by Higgs, who was the first to suggest that mass could only occur through the existence of a hitherto unknown particle.

Because of this, the particle has been named after him, although Higgs has always been swift to acknowledge vital contributions from others.

At the heart of the search for the “Higgs,” was a drive to fill the so-called Standard Model, a conceptual framework of the fundamental particles of matter.

The model, designed in the 1970s, failed to explain why some particles have substance, and others, such as light, have none.

The answer, according to the theories, lies in an invisible field of bosons, or force carriers, that was created after the Big Bang.

Fundamental particles travel through this field. Some interact with the Higgs to a greater or lesser degree, which thus confers mass, while others do not.

On July 4 last year, physicists at CERN announced to rousing applause that they had found an elementary particle “consistent with” the Higgs boson.

CERN Director General Rolf Heuer, in a statement on Tuesday, gave the biggest sign yet that the presumed particle is indeed the right one.

“The discovery of the Higgs boson at CERN last year, which validates the Brout-Englert-Higgs mechanism, marks the culmination of decades of intellectual effort by many people around the world,” he said.

In line with tradition, the laureates will receive their prize at a formal ceremony in Stockholm on December 10, the anniversary of prize founder Alfred Nobel’s death in 1896.

The pair will share the prize sum of eight million Swedish kronor ($1.25 million, 925,000 euros), reduced because of the economic crisis last year from the 10 million kronor awarded since 2001.