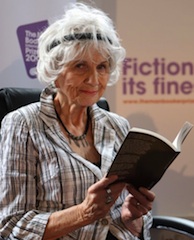 Canada’s Alice Munro won the Nobel Literature Prize on Thursday for her short stories that focus on the frailties of the human condition, becoming just the 13th woman to win in the history of the coveted award.

The Swedish Academy honoured Munro, 82, as a “master of the contemporary short story”.

It hailed her “finely tuned storytelling, which is characterised by clarity and psychological realism. Some critics consider her a Canadian Chekhov.”

“Her stories are often set in small town environments, where the struggle for a socially acceptable existence often results in strained relationships and moral conflicts — problems that stem from generational differences and colliding life ambitions,” it said.

Tipped as one of the favourites in the days before Thursday’s announcement, Munro is just the 13th woman to win the Nobel Literature Prize since it was first awarded in 1901.

She is also the first Canadian to win the prestigious honour.

She will be presented with her award at a formal ceremony in Stockholm on December 10, the anniversary of prize founder Alfred Nobel’s death in 1896.