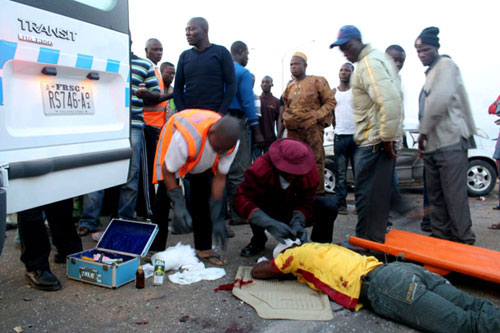 an accident scene in Nigeria

Ten other persons were injured.

The accident was said to have happened at Peke village, Kilometre 16 New Jebba Road, at the exact spot where the expressway terminates, at about 3.30 am, when the truck rammed into the commercial buses.

According to some of the survivors of the accident, the two buses, which carried 19 passengers each, were going to Katsina from Lagos,while the truck was heading towards Lagos.

The sector commander of the FRSC in Kwara state, Mrs. Mary Wakawa, said the corpses of the deceased had been deposited at the University of Ilorin Teaching Hospital, UITH.

She added that two victims with severe injuries had been taken to Sobi Specialist Hospital,Ilorin, while others with minor injuries were said to be receiving treatment at undisclosed private hospitals.

Wakawa, who blamed the accident on the attitude of most drivers in the country, decried night travelling, saying it is dangerous, with visibility poor, and emergency service, almost impossible.

According to her, the auto crash may have been caused by fatigue leading to sleep on the part of the truck driver.

Besides, she said that assistance would also be difficult to get at night.