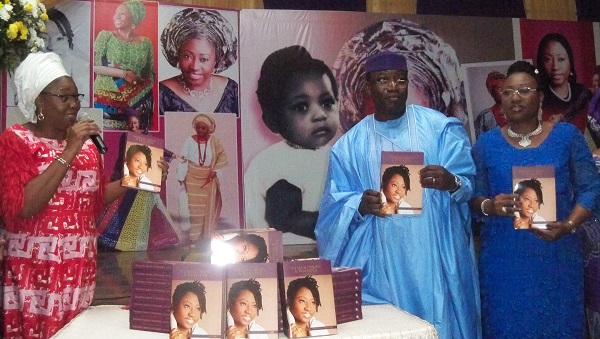 Dame Abimbola Fashola unveils one of the books. Governor Fayemi and his wife stand on the right

Notable people in and outside Nigeria today gathered at Ado-Ekiti, capital of Ekiti State to shower encomiums on Erelu Bisi, the wife of Ekiti State Governor, Dr. Kayode Fayemi as she presented two books she authored to the public to celebrate her golden jubilee.

The books are: Speaking Above a Whisper and Speaking for Myself.

In about five minutes talk, Senator Tinubu said that she did not know Erelu Fayemi in person but know her through her work appealing to the people of Ekiti to give Governor Fayemi an opportunity to serve for second term because the governor and his wife still have a lot to offer Ekiti State.

Speaking in the same direction, Otunba Adebayo, who described Erelu Fayemi as a rare breed, prayed that she and her husband would be a force to be reckoned with in the next five years.

For the Ekiti State Speaker, Erelu Fayemi is a wife par excellence who stood by her husband in the dark days when the military was hell bent to arrest him adding, “Erelu Fayemi stood with her husband and struggled with him to reclaim his stolen mandate. She advocates for gender equality. She stands for what is good. She is bold and courageous.”


Mrs. Abdulmumini, who described the Fayemi family as a friend of Nasarawa State, said that she was proud to be associated with Erelu Fayemi adding that her name would always feature in books as a woman who is committed to women emancipation.

Senator Ojudu prophesied that by the time her husband completes his second term in office, “she will stand before the world as a Nobel Laureate winner”.

In his speech, Governor Fayemi pointed out that he derives a lot of inspiration from the celebrant.

Reacting, the celebrant, who could not hide her joy said, “I cannot tell you how happy I am that God has made it possible for me to share my story”. She thanked her mother for bringing her up well.

Earlier, Gbowee gave a lecture tagged, “Leading the Change: The Journey of a Great African Icon”, where she extensively spoke on women violation concluding that it must be fought against. She described Erelu Fayemi as a mentor whose contributions make her what she is today.