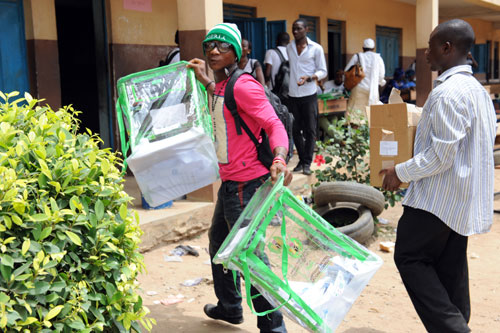 File photo of an INEC official on voting day

Also, protest by members of the National Youth Service Corps (NYSC), alleged snatching of ballot materials, alleged kidnapping among others, were reported in some parts of the senatorial district.

The death of Pius Ewherido in the month of June, who was elected Senator on the platform of Democratic People’s Party (DPP), to represent the district at the national assembly, necessitated the conduct of the bye-election.

Dr. Henry Ofa, Delta state Commissioner in NDDC, who voted at ward 8, unit 2 in Oghara, expressed optimism that candidate of the PDP would win the election, as he described Oghara as strong hold of party.

Expressing similar optimism was Solomon Idele, who voted at ward 8, unit 15, Ogharefe. The Chief Security Officer to former governor Ibori, told journalists that even though he lost the ticket of the party to Emmanuel Aguariavwodo, candidate of the party in the primary election, members of the party have agreed to work together to ensure victory for the party at the bye-election.

Voter turn out at Sapele was a little bit encouraging. delta State Commissioner for Housing, Paulinus Akpeki, expressed pleasure with the turn out of voters, just as he expressed confidence that PDP will win the election.

The story was however not the same at other places in the senatorial district.

As at 10 am, at Orogun primary school, ward 1, in Ughelli North local government area, about 100 members of National Youth Service Corps were seen protesting over the alleged inhuman maltreatment meted on them by the officials of the Independent National Election Commission (INEC), leaving materials meant for voting at the ward intact inside the bus that conveyed them there.

Some of the voters who visited the voting centres had to leave for their residents since no official was present at the centres to attend to them.

A presiding officer of ward 2, in Ewu, hometown of the late senator Ewherido was allegedly kidnapped by unidentified person, but he later resurfaced without the electoral materials in his possession, just as materials meant for voting in 28 polling units were allegedly snatched away by a chieftain of one of the participating parties in connivance with security operatives.

The materials were said to be inside a vehicle that conveyed them to the venue as at that time as a result of absence of electoral officers who would have supervised the final distribution to various units.

Supporters of Democratic Peoples’ Party (DPP) allegedly staged a peaceful protest to INEC office at Orerokpe over the late arrival of materials in 8 out of the 10 wards.

Materials were said to have arrived in the wards after 3pm which prompted the voters’ to embark on a protest, alleging that the delay of the materials was a ploy to manipulate the exercise in favour PDP candidate.

Electoral process was reported to have been peaceful and orderly in Sapele and Ethiope West local government areas.

Unconfirmed report has it that some youths under the guise of protecting the materials from being hijacked, beat up the electoral officer and held him hostage. But a political stalwart in the area was said to have mobilised security agents to move the materials to unknown destination.

Also in Agbarha-Otor ward with 26 voting units, election materials arrived the ward voting centre but absence of INEC officials stalled the progress of election at about 12 noon.

The materials, it was observed, were stuffed in the chartered vehicles and were guarded by heavily armed security operatives, even as members of the National Youth Service Corps (NYSC) were on ground waiting to take materials to their respective units.

An agent of one of the contending political parties in Agbarha-Otor who refused to give his name, attributed the non-distribution of the materials to the lack of logistics.

“INEC did not provide vehicle to move the materials to the units. But this is a family contest and the community is already making arrangement for vehicles so that the exercise can commence,” he said.

Election was said to be going on peacefully in ward 01 and 03 at about 3.30 pm while supporters of one of the parties resisted the distribution of materials in the other eight wards on the ground that the materials came late.

“In the eight wards, they are protesting because materials came at about 3pm. They are insisting that since election was supposed to end by 4pm, there would not be enough time for the materials to be distributed and if the exercise is allowed to stretch into the night, it may create room for manipulation. The people are protesting to INEC office in the LGA,” a local observer said.

NAN reported the extension of voting in some centres, where voting materials arrived late.

Euemunor said she was optimistic that all the voters in the ward would cast their votes following the time extension.

However, there were no electoral officials and materials at polling units at Amakpo Ward 1, Ighrokpokpor Ward 2 and Pipeline Ward 6 in Ughelli North.

In Ogharisi Primary School Ward 7 and Otowvovo Ward 9 in Ughelli South and Agbarotor Ward 12, there were no personnel and materials as at noon.

The situation resulted in poor turnout of voters as some had to leave the voting centres disappointed, since no official was present when they called.

The security situation in the areas monitored was peaceful, except at Ewu, Ughelli South.