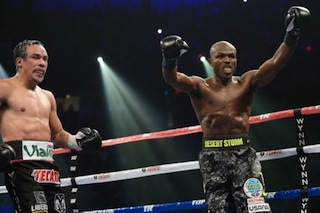 Bradley almost sent Marquez down with a left hook in the closing seconds of the 12th.

The 30-year-old US champion — 10 years younger than Marquez — was the aggressor through much of the fight, but he avoided the kind of brutal slugfest he endured in a unanimous decision victory over Ruslan Provodnikov in March that left him nursing a concussion.

Even so, Bradley said this decision offered no room for the kind of argument that greeted his controversial victory over Pacquiao in June of last year.

“He couldn’t touch me,” Bradley said. “I gave him a boxing lesson.”

Marquez kept it close, and rocked the champion in the ninth, insisting he thought he’d done enough to earn the victory.

Marquez is no stranger to disappointing decisions. He endured two narrow defeats and a draw against Pacquiao before stunning “Pac-Man” with a sixth-round knockout in their fourth fight in December.

“I’ve been robbed six times in my career,” Marquez said. “I clearly won the fight.”

On the undercard, former champion Orlando Salido knocked out Orlando Cruz in the seventh round to regain the vacant WBO featherweight title.

Salido improved to 40-12-2 with 28 knockouts while Cruz, who made headlines as the first openly gay pro fighter, fell to 20-3-1 with 10 wins inside the distance.

Two-time Olympic gold medalist Vasyl Lomachenko of Ukraine made an impressive professional debut with a fourth-round knock-out of jose Ramirez in a scheduled 10-round bout.