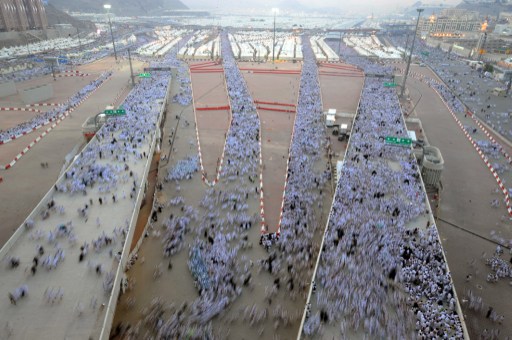 Hundreds of thousands of Muslims converged on Mina valley in Saudi Arabia Tuesday to join a symbolic stoning of the devil, the final stage of the annual hajj pilgrimage.

The occasion coincides with the first day of Eid al-Adha, the feast of sacrifice, which is celebrated by Muslims around the world.

Although the numbers this year are down to less than half the 3.2 million who attended last year’s hajj, the crowds of faithful managed to transform the Mina valley, just outside the holy city of Mecca, into a vast sea of white as they flocked from all directions towards the place of stoning.

An endless torrent of pilgrims, dressed in the ihram, a two-piece seamless white garment, cried “Allahu akbar” (God is the greatest) as they hurled pebbles they had collected overnight at nearby Muzdalifah at concrete pillars representing the devil.

After pausing to say prayers, they then moved along the massive concrete structure constructed by Saudi authorities to avoid deadly incidents.

Hundreds of police guarding the multi-storey building struggled at times to keep the crowd under control but those performing the ritual reported a less chaotic experience than in past years.

“The crowd this year was smaller and as a result the movement was smoother,” said Shiraz Khorshid from Pakistan.

“My experience was very nice and arrangements were excellent at all facilities,” said Khorshid, a 35-year-old lecturer at a training institute in eastern Saudi Arabia.

“This year is certainly better than last year especially with regards to traffic jams and easy movement. We were able to use the train for the first time,” said Turkey al-Ashwal from Yemen, who had also performed the hajj last year.

Saudi Arabia this year slashed the numbers of pilgrims from abroad by 21 percent and reduced the number of permits for domestic pilgrims by more than half, allowing a total of 1.5 million pilgrims, including 1.38 million foreigners from 188 countries.

The kingdom cut the quotas over fears of infections from the MERS respiratory virus and because of massive projects to expand the capacity of the Grand Mosque in Mecca, Islam’s holiest place of worship.

Health authorities have insisted that no cases of MERS or any other epidemic has been detected among pilgrims.

The stoning rituals continue until Friday but pilgrims in a hurry can complete it a day early.

The ritual is an emulation of Ibrahim’s stoning of the devil at three spots where he is said to have appeared trying to dissuade the biblical patriarch from obeying God’s order to sacrifice his son, Ishmael.

The pilgrims had been on the move since early Sunday when the annual hajj began. They left Mecca to Mina where then climbed Mount Arafat on Monday for the high point of the hajj.

After spending the day at Mount Arafat in prayer and reflection, pilgrims Monday evening travelled on to Muzdalifah to collect stones and to stay the night.

Early Tuesday they continued to Mina in groups, with leaders carrying their countries’ flags and banners.

A group of Syrians were seen carrying the rebels’ flag while a number of Egyptians raised their four fingers, a sign of support for deposed Islamist president Mohamed Morsi, though no protests were staged.

The stoning of the devil used to mark the most dangerous phase of hajj for Saudi authorities as it was marred by deadly stampedes in the past as well as fires in tent camps.

In past years, however, tents have been fire-proofed while gas canisters and cooking are banned in the camps. The stoning area has been expanded to avoid overcrowding.
.Story and photos courtesy of AFP