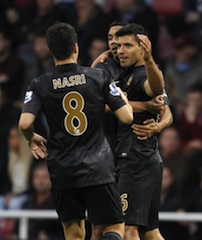 Aguero, right with Nasri and another player in celebration

LONDON(AFP) – A masterful performance from Sergio Aguero saw Manchester City win 3-1 at West Ham United on Saturday to claim their first away victory in the Premier League this season.

The Argentina forward scored either side of half-time before setting up David Silva for the clincher after Ricardo Vaz Te’s acrobatic overhead kick had given West Ham a glimmer of hope.

It was no more than the visitors deserved from a pulsating encounter in east London and moved last year’s runners-up into fourth spot.

West Ham manager Sam Allardyce was celebrating his 59th birthday and he used his programme notes to urge supporters not to expect too much, too soon from emerging midfielder Ravel Morrison.

The former Manchester United trainee took his place in the free-form 4-5-1 formation used to such devastating effect in last week’s 3-0 win at Tottenham Hotspur, with Mohamed Diame once again deployed as a ‘false nine’.

Perhaps with the trip to play CSKA Moscow in the Champions League on Tuesday in mind, City manager Manuel Pellegrini changed the entire defence used in the last match against Everton, with Samir Nasri also coming in for James Milner.

But the Chilean did keep faith in the burgeoning strike partnership between Aguero and Alvaro Negredo and they almost found an early breakthrough in the seventh minute when Negredo just failed to control a precise chip into his path.

West Ham’s response was to surge up to the other end and Vaz Te was unlucky not to get to Mark Noble’s cross ahead of Joe Hart.

Nine minutes later, City took the lead as Negredo dummied a through ball from Fernandinho to fool James Tomkins and Winston Reid, allowing Aguero to take full advantage by slotting past Jussi Jaaskelainen.


The home side had their goalkeeper to thank for keeping them in the game after that as he produced two saves to deny Aguero his second goal.

With Morrison pulling the strings, West Ham looked dangerous on the break and almost found a way through when Razvan Rat’s teasing cross was hacked clear by Matija Nastasic.

A moment of madness from the usually impeccable Reid then nearly gifted City a second before the break when he passed straight to Silva, but Jaaskelainen did well to keep out Yaya Toure’s curling effort.

The visitors did not have to wait long to double their lead after half-time, however.

Far from give up the ghost, that goal seemed to inspire West Ham. Diame was denied by a sharp save from Hart before a brilliant overhead kick from Vaz Te pulled a goal back when City failed to clear a cross.

City kept pouring forward and Negredo could not believe his luck when his effort cannoned back off the crossbar.

Jaaskelainen then produced yet more heroics to keep his side in the match when he denied Aguero his hat-trick before saving again from substitute Aleksandar Kolarov.

Allardyce threw on Matt Jarvis for a visibly disappointed Vaz Te, but despite finding space down the flanks, too often there was no one on the end of their final balls into the box.

City left Aguero as their sole striker and looked to play on the break, and it was another piece of sublime skill from the Argentine that finally settled matters 10 minutes from time.

Instead of shooting when he found space on the edge of the box, a glorious backheel into the path of the onrushing Silva allowed the Spaniard the opportunity to curl an exquisite shot into the net to complete a satisfying afternoon for the visitors.