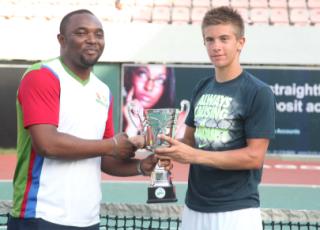 The 16 year- old player had in the semi final played on Friday stopped pre tournament favourite, South Africa’s Ruan Roelofse to set up an all Croatian final cracker. He won for himself the first leg’s $15,000 prize money for the Men’s Singles.

The teenage sensation told journalists after the match that he was delighted to have won Futures 1 of the 13th edition of the Governor’s Cup at the expense of his tougher opponent.


“It was a tough match and I am glad that I succeeded in defeating him (Pavic). He’s a player that I had played against in the past.

“I really want to use this medium to appreciate the Croatian Tennis Federation for the support given to me and some private companies in my countries because they made it possible for me to travel around the world,” he said.

In the Women’s Singles event of the first leg, Slovenia’s Tadeja Majeric showed great composure to defeat compatriot, Dalila Jakupovic of Slovakia in straight set of 7-5,7-5 to cart home the $25,000 prize money for the first week.

Majeric, who is top seed in the women’s singles maintained her rating right from the first round to the final where she won the trophy in a game that lasted over two hours.

After the match, Majeric expressed satisfaction winning the first week after two years of unsuccessful outings in Lagos.

“Winning this time did not come on a platter of gold because I really worked to get this far,” she said.

The men’s doubles was won by the duo of Ante Pavic of Croatia and South African Ruan Roelofse after beating the pair of Borna Coric and Dino Marcan of Croatia.