Lar's body to stay in US for now 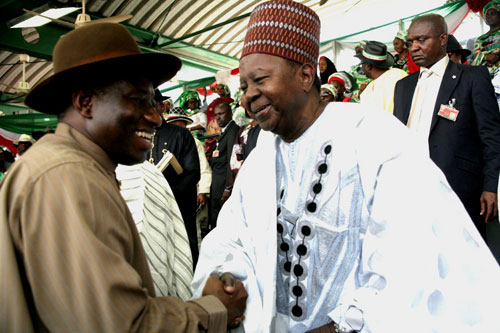 The remains of the Late Chief Solomon Lar, founding Chairman of Nigeria’s ruling Peoples Democratic Party, PDP, would be brought from US when the date for its interment would have been fixed.

Governor of Lar’s home state of Plateau, Jonah Jang made this known in Jos on Saturday when he received Governor Tanko Al-Makura of Nassarawa on a condolence visit to the State over the demise of the political icon.

Prof. Ade Adefuye, Nigeria’s Ambassador to the U. S., had told the North America correspondent of NAN in New York on Wednesday that Lar’s remains would leave the U.S. on Friday and arrive in Nigeria on Saturday.

Jang requested Al-Makura to submit names of 10 persons to be members of the burial committee.

He thanked his Nasarawa counterpart who came with a large entourage to commiserate with Lar’s family and the people of Plateau.

Al-Makura described Lar as a man who fought for the emancipation of the middle-belt region, and one who possessed the spirit of a real democrat.

“Baba Lar was an emancipator who gave everyone a sense of belonging irrespective of creed, tribe or religion. These attributes endeared him to many’’, he said.

Al-Makura said a condolence register would be opened in Nasarawa State Government House for those who could not make it to Plateau to pay their respects.

He promised to join forces with Plateau for the burial.

He prayed that God would grant the decreased eternal rest and the family, the state and the nation the fortitude to bear the loss.