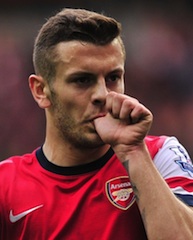 LONDON, October 19, 2013 (AFP) – Arsene Wenger hailed Arsenal’s opener in the 4-1 win over Norwich City as one of the best goals he has ever seen at the Emirates Stadium.

England midfielder Jack Wilshere finished a fluid passing move as the Gunners swept across the half-way line and put the Canaries on the back foot in the 18th minute on Saturday.

Wilshere started and then ended the attack that involved Spaniard Santi Cazorla and a sublime one-two with France striker Olivier Giroud to lift the ball over the back four into the path of Wilshere who ghosted in and tucked home.

“It was certainly one of the best and one I enjoyed the most,” said Wenger, whose side cruised to victory after Wilshere’s strike thanks to Mesut Ozil’s double and an Aaron Ramsey goal.

“It was the combination and speed I like to play. It was a mix of technical quality, speedy thinking and quick reaction. It was a great goal.

“I think we have scored some good goals already this season, but the first was exceptional.

“I think their keeper played well and they played well. We had a period where we struggled to keep out game going too.”

The introduction of Ozil has energised Arsenal and the Germany midfielder is bringing the best out of his team-mates, especially Ramsey and Wilshere.

The Gunners have managed to move to the top of the Premier League, two points ahead of Chelsea and Liverpool, without a number of key players such as Theo Walcott, Alex Oxlade-Chamberlain and Lukas Podolski

“Everybody will play,” added Wenger who could be without Mathieu Flamini against Borussia Dortmund for their Champions League tie on Tuesday after he got came off with concussion.

Jonny Howson gave Norwich a life-line at 2-1, but it only went on to inspire the Gunners to hit more.

With just two wins from eight games to their name, the Canaries are in the midst of an early season relegation battle, with the pressure increasing on boss Chris Hughton.

“Arsenal certainly have got the squad to sustain this. They are a side that can score goals,” said the Norwich boss.

“There are a lot of positives in our last two games though and our level of performance have been good.”

Even Hughton was willing to pay tribute to Arsenal’s formidable opener.

“I think on the first one there aren’t many teams that can score that type of goal,” he said.

“It got a bit of fortune off Alex Tettey in the way. If I looked at that goal it was from a ball we gave away high up the pitch.

“We had to be better at that. But overall, the biggest disappointment for me is that I don’t think 4-1 is a true reflection of the balance of play.”