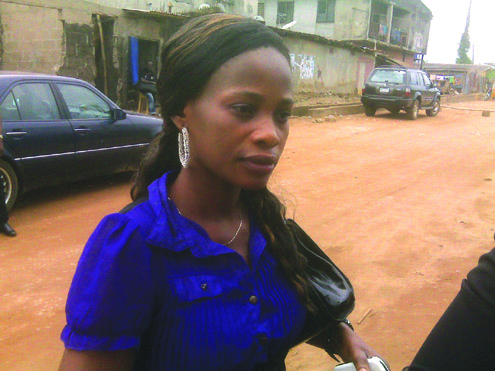 Nkiruka Muonagorom at the court on Monday

A 27-year old housewife, Mrs. Nkiruka Muonagorom, on Monday,  told the Ejigbo Customary Court, Lagos, western Nigeria how she was chased out of her matrimonial home by her husband’s lover just four months after their marriage.

The woman, who said she was four months pregnant for her 33-year old husband, Chigozie, a  spare parts dealer, said she and her husband were preparing for the white wedding when the incident happened.

She also said that her husband, who took no action against his lover, brought the woman identified as Kelechi home and impregnated her.

Right now, she said, Kelechi lives with Chigozie, while she, the legally married woman, had been living with a relation after she was thrown out of her husband’s house and could not return for fear she could be killed.

Nkiruka, who has since put to birth, is asking the court to dissolve the marriage as she could no longer cope with the situation and ill-treatment from the man who brought her all the way from Abagana in Anambra State, eastern Nigeria, after their traditional wedding.

In tears, she narrated how her husband, an indigene of Nnewi, Anambra State, had come to her village and performed the traditional rites before before bringing her to Lagos, without her knowledge that the man had been dating Kelechi and that he had earlier married three other times before. The three women, she said, all left Chigozie.

She said immediately Kelechi got information that Chigozie had brought her to his Gbagada home, she (Kelechi) stormed the house and forced her out while threatening her life in the presence of her husband.

She said they could not go ahead with the wedding and that since then, Chigozie had abandoned her and their baby.

“Since I delivered the baby, my husband had not cared for us and we have been suffering,” she told the court.

She also told the court that she was no longer interested in the marriage and wanted Chigozie to take care of the baby so that she would move on with her life.

Responding, Chigozie admitted that Kelechi was his lover and that she was pregnant and living with him. He denied maltreating Nkiruka and the baby and promised to send a monthly allowance of N5,000 to her for the baby.

He told the court that he was the one who paid the hospital bill after the birth of the baby, adding that he was in support of the dissolution of the marriage.

The president of the court, Mr. T.A. Eko, condemned Chigozie’s attitude to Nkiruka, expressing sadness that he brought her to Lagos, impregnated her and dumped her.

He reminded Chigozie that whatever one does, one reaps, especially when it comes to maltreating an innocent baby.

He talso adjourned the matter till 4 November for judgment.