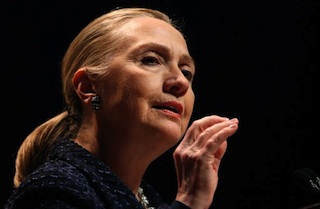 Billionaire financier George Soros, a major Democratic donor, is backing an effort to persuade former U.S. Secretary of State Hillary Clinton to run for president in 2016, a spokesman said on Thursday.

The wife of former President Bill Clinton would be widely viewed as the favorite for the Democratic presidential nomination if she decides to run.

“His support for Ready for Hillary is an extension of his long-held belief in the power of grassroots organising,’’ said Soros spokesman Michael Vachon.

Soros’ pledge puts him on the PAC’s National Finance Council, along with several other major Democratic donors and officials, the group said.

But symbolically, Soros’ support could mean much more – particularly at a time when Clinton’s supporters are seeking to ward off potential challengers to her in Democratic presidential primaries.

Soros was a huge financial backer of Democrats during the 2004 election cycle, donating an estimated 27.5 million dollars.

He also contributed heavily to Sen. Barack Obama’s presidential campaign in 2008. Clinton lost the Democratic nomination to Obama that year.

During last year’s election, however, Soros largely stayed on the sidelines, expressing distaste for new election laws that allowed unlimited fundraising and spending by new “Super PACs” and non-profit groups.

Clinton, 65, a former U.S. senator from New York whose four-year run as secretary of state ended in February, has acknowledged that she is considering another run for president but has said she likely will not decide until next year.

In the meantime, she has begun to look like a candidate – staying in the spotlight by appearing at a series of paid speeches and fundraisers.


Ready for Hillary, which is not officially affiliated with Clinton, was founded this year by a former aide in Clinton’s unsuccessful campaign for the Democratic presidential nomination in 2008.

The group had raised 1.25 million dollars by July and now claims to have more than 20,000 donors, including many longtime Democratic fundraisers and Obama supporters.

Members of Obama’s 2012 re-election campaign also have signed on.

Besides Soros, Democratic donors Amber and Steve Mostyn and Clinton friend Susie Tompkins Buell are among the major donors to Ready for Hillary.

Democratic lawmakers such as U.S. Senators Claire McCaskill of Missouri and Kirsten Gillibrand of New York have publicly urged Clinton to run for president.