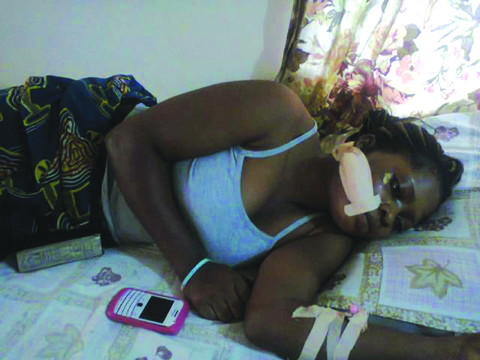 The police in Lagos have arrested a couple, Mr and Mrs Solomon, for allegedly stabbing their neighbour, Miss Happiness Andrew, 25, during a quarrel over dustbin.

The victim, who has been hospitalised, was  allegedly stabbed in the neck and face with a broken bottle and with a knife following a little misunderstanding.

Hapiness fell down almost unconscious as blood gushed profusely from her neck and face.

She was rushed to Ajowa Hospital, Araromi, in the night immediately after the incident occurred where the doctor and nurses in the hospital battled to save her life.

P.M.NEWS gathered that the attack happened at their residence at 4, Modupe Ayode Street, Araromi area of Iyana-Ipaja, Lagos, southwest Nigeria.

The police arrested the man and his wife who hail from Edo State, and charged them to court.

Happiness, a security guard working at an eatery at Tollgate area,  narrated to our reporter on her hospital bed what happened on the fateful day at the two-storey building where she lives with her sister.

She said there was a misunderstanding over the issue of refuse being dumped in her sister’s dustbin by her neighbours after she complained about it because none of the neighbours help to throw it away when the PSP people come around.

Happiness said their neighbour, Mrs Solomon, popularly called Mama Osas, heard her complaining and reported the matter to her elder sister, which made her furious and spoke to her rudely the following day when she came back from work.

“When my sister came back from work, she was talking to me angrily and saying that she will leave the house for us and run away since we cannot take care of her house when she is away. I did not reply her and this continued till Sunday. And when I finally challenged her, she told me what Mama Osas told her about the dustbin.

“I told my sister that I did not mention anybody’s name and that I can call people to witness to it. I went to call one of the witnesses to confirm what I said that day. As we were talking, Mama Osas came to the scene and was pointing her finger close to my face and saying that she was going to fight me, but I told her that there was no way I could fight with her,” she explained.

According to her, as the altercation was on, Mr Solomon came to the scene with his 14-year old boy, and thinking he wanted to call his wife to order, someone suddenly stabbed her in the neck and another by the side of her head, and she immediately fell down, bled profusely and became unconscious.

She said it was later she learnt that it was Mr Solomon who allegedly stabbed her in the neck with a broken bottle and on her face with a knife, saying that after carrying out the act, Mama Osas rushed to the Mosalashi Police Station before them to report that she was attacked by her neighbour.

However, Happiness’ family members also went to the police station with the landlord of the house to report the incident.

“The landlord told the police that it was the couple that stabbed me and the police arrested the woman while her husband ran away. He was later arrested and both of them were charged to the Ejigbo Magistrates’ Court and remanded in Kirikiri Prison,” she said.

Mrs Esther Ogwu, Executive Director, Esther Child Rights Foundation, said her organization would pursue the case in court to a logical conclusion, describing the couple as wicked for carrying out such a dastardly act.

She said her foundation would petition the Office of Public Defender, OPD, to take up the case on behalf of the victim as it was a case of attempted murder.

Dr. Ige Omolade of Ajowa Hospital, told P.M.NEWS that Andrew was drenched in pool when she was rushed to the hospital on the fateful night.

He said she was responding very fast and in stable condition, assuring that she would soon be okay and ready to be discharged from the hospital.