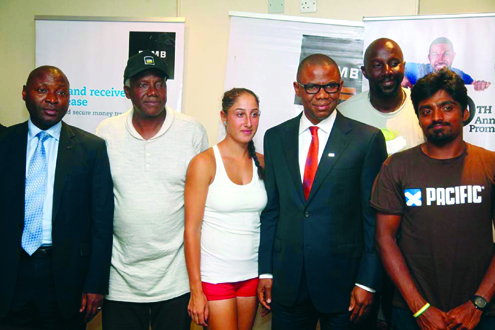 One of the major sponsors of the Annual Governor’s Cup Lagos Tennis Championship, First City Monument Bank, has vowed to continue supporting the tournament for the unforeseeable future.

This much was disclosed by the bank’s Deputy Group Director, Femi Odusanya while receiving journalists and players at the Championship, during a courtesy visit to their head office in Marina, Lagos Island.

Odusanya expressed his gratitude to the players for making the trip despite their busy schedule, stating that they feel honoured to know that the players appreciate their continuous partnership with the Governor’s Cup.

According to him, “we appreciate having the players around despite their busy schedule and it really goes to show how much the appreciate our partnership with the Championship.
“In giving back to sports in the country, we have associated ourselves with tennis especially the Governor’s Cup for the past five years and to be realistic, we shall continue the partnership for a some time.

“Meanwhile, it will also be our desire to see Nigerian players competing at major tourneys against their foreign counterparts, this will further encourage our sponsorship of the tournament”.

Speaking on behalf of the players, India’s Vishnu Vardhan appreciated the sponsor’s gesture and hopes that the players can always bank on their continuous sponsorship to participate in the Championship every year.

“We really appreciate our sponsors because they have made this tournament possible over the years and we wish to come here and enjoy the tournament next year, thank you” he said.
Tournament Director of the ITF pro-circuit, Prince Wale Oladunjoye, also underscored the importance of sponsorship and believes that when a player is aware that he has sponsors, he will be encouraged to put in more effort.

In his words, “we really appreciate our sponsors for their continuous support, it has been massive. It boosts a player’s morale when he is assured that he has sponsors and he could entertain the world like the Williams Sisters often do so we are grateful for your support”.
—Damilare Okunola