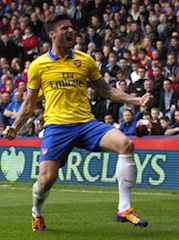 Mikel Arteta scored and was then sent off as Arsenal edged Crystal Palace 2-0 at Selhurst Park on Saturday to establish a five-point lead at the Premier League summit.

The Spaniard put the visitors ahead with a 47th-minute penalty, but he was contentiously shown a straight red card with 25 minutes remaining for a last-man foul on former Arsenal man Marouane Chamakh.

Second-bottom Palace, who sacked manager Ian Holloway on Wednesday, came close to snatching an equaliser, but Arsenal made sure of victory late on when Olivier Giroud headed home from Aaron Ramsey’s dinked cross.

After an even first period, Arsenal made the breakthrough early in the second half, with Arteta sweeping the ball inside the left-hand post from 12 yards after Adlene Guedioura upended substitute Serge Gnabry.


Gnabry and Giroud both threatened to extend Arsenal’s lead, but Palace were handed a lifeline in the 65th minute when Arteta was sent off for bringing down Chamakh despite the offence occurring around 45 yards from goal.

Palace pressed forward, and Arsenal were indebted to goalkeeper Wojciech Szczesny for producing two jaw-dropping saves within the space of a minute to thwart Joel Ward and Mile Jedinak.

With three minutes remaining, Ramsey crossed for Giroud to head past Julian Speroni and confirm Arsenal’s return to winning ways following their mid-week defeat by Borussia Dortmund in the Champions League.