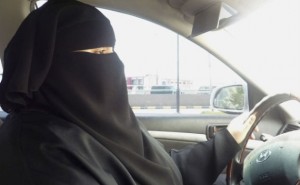 A Saudi woman driving a car: a formal demand made to end the ban

RIYADH(AFP) – Only a few Saudi women braved official threats of punishment and got behind the wheel Saturday in defiance of a ban on driving, but organisers say their campaign will continue.

Undeterred by the warnings of unspecified sanctions, and increased security in Riyadh, several women posted videos of themselves driving on Saturday.

At least four videos were posted on YouTube, including from the capital, and rights activist Naseema Assada said three others had driven in Eastern Province to show women’s “determination.”

Activists had originally issued a call on social media networks for women across the ultra-conservative Muslim kingdom to drive their cars on Saturday to challenge the ban.

“Had there not been a threat from the interior ministry, more women would have responded,” said Assada, who did not herself drive so that “authorities would not consider the move a challenge” to the ministry orders.

More women are expected behind the wheel in the coming days if authorities take no measures against those who defied the ban on Saturday, activists say.

An AFP photographer reported that police patrols and checkpoints were deployed across several parts of Riyadh.

One of the videos shows a woman cloaked in black and wearing dark sunglasses, identified as May al-Sawyan, driving somewhere in the capital, apparently without being stopped.

She could be seen in what appeared to be the parking lot of a shopping mall, before driving onto a main road with little traffic.

For now, the “Women’s Driving is a Choice” campaign has taken a back seat in the face of the warnings.

“The authorities clearly do not want any gatherings on a specific date,” activist Maysaa al-Amudi said of the “drive-in”.

“We are trying to calm things down and affirm that the campaign will continue but without a specific date.”

Some say they received telephone calls from the interior ministry asking them to promise they would not drive on Saturday.

On Wednesday, the ministry said it would act against anyone who attempts to “disturb public peace” by congregating or marching “under the pretext of an alleged day of female driving.”

The next day ministry spokesman General Mansur al-Turki told AFP: “It is known that women in Saudi are banned from driving and laws will be applied against violators and those who demonstrate in support” of this cause.

Activists say Saturday was chosen as a “symbolic” date as part of efforts first launched more than a decade ago to press for the right to drive.

The absolute monarchy is the only country in the world where women are barred from doing so, and public gatherings are officially banned .

But women have been increasingly driving in various areas over the past two weeks, with videos posted on the Internet.